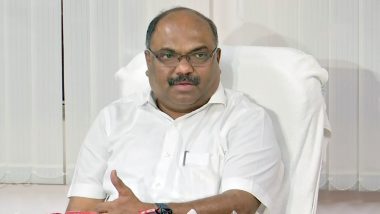 Mumbai, May 26: The Enforcement Directorate (ED) swooped on the homes and offices of Shiv Sena leader and Transport Minister Anil D. Parab, here early on Thursday.

The action follows a complaint lodged by the agency in an alleged money-laundering case against Parab.

Parab became the second sitting Minister of the Maha Vikas Aghadi government who has been targetted by central probe agencies.

Earlier in February, Nationalist Congress Party Minister Nawab Malik had also been raided and is currently in jail.

Opposition Bharatiya Janata Party former MP Kirit Somaiya, who had predicted the ED actions, said this is only the beginning and many more persons shall be in the net.

(The above story first appeared on LatestLY on May 26, 2022 09:56 AM IST. For more news and updates on politics, world, sports, entertainment and lifestyle, log on to our website latestly.com).