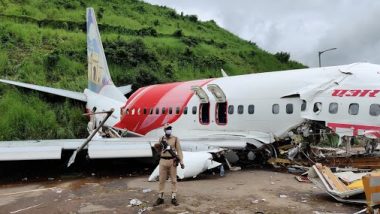 Kochi, August 8: The government on Saturday announced an interim relief for the victims of the Air India Express plane crash that took place in Kerala on Friday. Civil Aviation Minister Hardeep Singh Puri said that Rs 10 lakh each will be given to the kin of the deceased, Rs 2 lakh each will be given to passengers who are seriously injured and Rs 50,000 will be given to those who suffered minor injuries. Earlier today, the Civil Aviation Minister visited the Kozhikode Airport, where an Air India Express flight crash-landed on Friday. The death toll in the plane crash rose to 18, including two pilots while the injured have been admitted to different hospitals. Air India Express Flight IX-1344 Overshoots Runway at Calicut Airport in Kerala's Kozhikode; Watch Devastating Videos.

According to K Gopalakrishnan, Malappuram Collector, 180 passengers and 6 crew members were on board the flight. The official informed that 149 injured passengers have been admitted to hospitals in Malappuram and Kozhikode districts, of which 22 in critical condition while 22 have been discharged after first aid. The Digital Flight Data Recorder and Cockpit Voice Recorder of the ill-fated aircraft have been retrieved from the accident site. The Civil Aviation Minister said that the Aircraft Accident Investigation Bureau (AAIB) is conducting probe. Air India Express Plane Crash Update: 18 Dead Including 2 Pilots.

As an interim relief, we will be making a payment of Rs 10 lakhs (to kin) of each deceased, Rs 2 lakhs for seriously injured & Rs 50,000 for those who suffered minor injuries: Hardeep Singh Puri, Civil Aviation Minister on #KozhikodePlaneCrash

My heart goes out to the families & friends of the 18 people who lost their lives in the air accident involving @FlyWithIX Flight IX-1344 in Kozhikode last evening & offer my heartfelt condolences.

Reasons for the mishap are being investigated. pic.twitter.com/awEGpU9EmK

On Friday, Kerala witnessed one of the worst air disasters after the Air India Express flight, returning from Dubai under the Vande Bharat mission, skidded off the runaway at the Kozhikode airport. The plane plunged 35 feet into the valley below, as it landed on its second attempt amid heavy rain on Friday.

(The above story first appeared on LatestLY on Aug 08, 2020 01:43 PM IST. For more news and updates on politics, world, sports, entertainment and lifestyle, log on to our website latestly.com).