According to reports, a division bench of justices Sandeep Mehta and Devendra Kachhawaha after hearing the plea directed public prosecutor Anil Joshi to seek Asaram’s medical report from All India Institute of Medical Sciences (AIIMS) Jodhpur 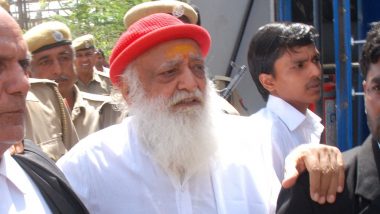 Jodhpur, May 10: Asaram Bapu, the controversial self-styled 'godman' who has been serving a life sentence in connection with a rape case, approached the Rajasthan high court for interim bail and better treatment days after he tested positive for COVID-19. Asaram had tested positive for COVID-19 on May 6 and was shifted to the ICU of MDM Hospital in Rajasthan's Jodhpur city.

According to a report by Hindustan Times, a division bench of Justice Sandeep Mehta and Justice Devendra Kachhawaha heard the plea and directed public prosecutor Anil Joshi to seek Asaram’s medical report from All India Institute of Medical Sciences (AIIMS) Jodhpur.

Asaram was admitted to Mahatma Gandhi Hospital on Wednesday from Jodhpur Central Jail. The 80-year-old had complained of restlessness and his oxygen level was very low. Later, he was admitted to the ICU.  He is currently at AIIMS Jodhpur and taking treatment for lung infection.

(The above story first appeared on LatestLY on May 10, 2021 06:21 PM IST. For more news and updates on politics, world, sports, entertainment and lifestyle, log on to our website latestly.com).