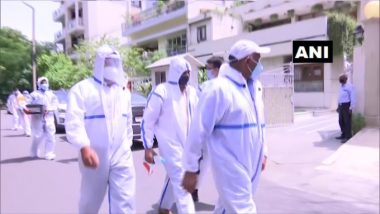 New Delhi, June 26: A team of Central Bureau of Investigation (CBI) officials wearing PPE kits conducted searches at premises of Ratul Puri at New Friends Colony in Delhi on Friday. The raids were conducted in connection with a bank fraud case of approximately Rs 787 Crores. The CBI also raided premises of Ratul’s father Deepak Puri and Moser Baer Solar Ltd at Delhi and Noida in the same case.

“In the view of Covid-19, all precautions regarding health and safety are being taken while conducting the searches including provision of PPE (personal protection equipment) kits to all the search teams,” reported Hindustan Times quoting RK Gaur, CBI Spokesperson as saying. Ratul Puri Sent to 6-Day ED Remand in Money Laundering Case Linked to AgustaWestland Scam.

The searches were conducted after a new FIR was lodged against Ratul and his father. Ratul is the nephew of former Madhya Pradesh chief minister Kamal Nath. According to officials, a case was registered in the matter on a complaint by the Punjab National Bank (PNB) against Moser Baer Solar Limited and others including its directors and other unknown persons and unknown bank officials.

The Enforcement Directorate (ED) had arrested Ratul on August 19 last year. The arrest was made based on the complaint filed by PNB. However, he was later granted bail by Delhi’s trial court. The ED had in October last year filed a chargesheet against Nath’s nephew. Ratul is also being investigated in a money laundering case related to the AgustaWestland VVIP chopper scam.

(The above story first appeared on LatestLY on Jun 26, 2020 05:04 PM IST. For more news and updates on politics, world, sports, entertainment and lifestyle, log on to our website latestly.com).