After the Republic Day violence, the Delhi Police has deployed additional measures, including tightening security and intensifying vigil at the city's border points, to deal with any situation emerging out of the 'chakka jam', officials had said. 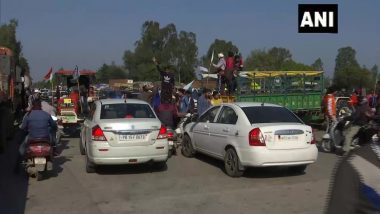 New Delhi, February 6: Entry and exit facilities at 10 prominent Delhi Metro stations, including Mandi House and ITO, were temporarily closed on Saturday in view of the 'chakka jam' protests by farmer unions agitating against the new farm laws.

Farmer unions on Monday had announced a countrywide 'chakka jam' on February 6 when they would block national and state highways between 12 noon and 3 pm to protest the Internet ban in areas near their agitation sites, harassment allegedly meted out to them by authorities, and other issues.

However, the Samyukt Kisan Morcha, an umbrella body of the farmer unions protesting the three farm laws, on Friday said the protesters will not block roads in Delhi, Uttar Pradesh and Uttarakhand during the 'chakka jam'. Chakka Jam: Security Tightened in Parts of Delhi, Extensive Barricading Seen at Ghazipur Border; Heavy Deployment of Police at Red Fort As Preventive Measure.

The Delhi Metro Rail Corporation (DMRC) in a series of tweets informed commuters that multiple stations have been closed. "Security Update Entry/exit gates of Mandi House, ITO and Delhi Gate are closed," it tweeted.

It later also tweeted that entry and exit gates of Vishwavidyalaya station were also closed.

After the Republic Day violence, the Delhi Police has deployed additional measures, including tightening security and intensifying vigil at the city's border points, to deal with any situation emerging out of the 'chakka jam', officials had said. No Bharat Bandh, But Nationwide Chakka Jam on February 6 as Farmers Plan to Protest Against Internet Ban; Know Timings And Other Details.

Farmers shouted slogans and parked their tractors-trolleys in the middle of highways at several places in Punjab and Haryana as they blocked roads on the call given by the farmers' unions for a nationwide 'chakka jam'. In Rajasthan too, farmers protesting against the Centre's new agri laws and other issues blocked roads at several places.