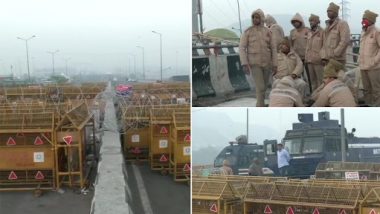 New Delhi, February 6: The Delhi Police have been put on high alert and security across the national capital has been beefed up in view of the farmer's threat of 'Chakka Jaam', i.e. the call to block toll plazas and national highways to protest against the three Central farm laws on February 6. According to a tweet by ANI, extensive barricading measures have been undertaken at Ghazipur border. Moreover, water cannon vehicles have also been deployed, as a preemptive measure to deal with possible disturbances resulting from 'Chakka Jam' calls by farmer unions protesting farm laws. No Bharat Bandh, But Nationwide Chakka Jam on February 6 as Farmers Plan to Protest Against Internet Ban; Know Timings And Other Details.

The Delhi Police informed that around 50,000 personnel of Delhi Police, Paramilitary and Reserve Forces deployed in Delhi-NCR region. "At least 12 metro stations in the national capital have been put on alert for closing the entry & exit, in view of any disturbance", the Delhi Police said.

The Farmer unions on Monday had announced a countrywide 'chakka jam' on February 6. In a bid to maintain law and order, heavy deployment of police personnel was seen at the Red Fort region as a preventive measure to dispel actions resulting from calls for 'Chakka Jaam' by farmer unions. Visuals from Minto Bridge area showed that security personnel have been deployed along with barricading measures and the area has been blockaded as a preemptory counter-measure to thwart 'Chakka Jaam' calls announced by farmer.

Visuals from the Delhi side of the border pic.twitter.com/wQcfu5CTDN

To assist Delhi Police in maintaining law and order situation amid 'Chakka Jaam' call by farmers, Paramilitary Forces have been deployed at various parts of Delhi-NCR including borders. pic.twitter.com/J9Js2LLH1B

Delhi: Heavy deployment of police personnel at the Red Fort as a preventive measure to dispel actions resulting from calls for 'Chakka Jaam' by farmer unions protesting the farm laws pic.twitter.com/IgHF11YWyg

The security measures have been stepped up in several regions in view of the countrywide roadblock on Saturday. The farmers' organisations have exempted emergency and essential services from this bandh and clarified that the 'Chakka Jam' will not be held inside Delhi. A slew of guidelines have also been issued by the farmers union to ensure a peaceful protest during the chakka jam.

According to the guidelines, farmers will block only the national and state highways across the country from 12 noon to 3 pm. On Friday, Bharatiya Kisan Union (BKU) Rakesh Tikait on Friday said that the farmers will not block roads in Uttar Pradesh and Uttarakhand along with Delhi-NCR.

Farmers have been protesting at different borders of the national capital since November 26 last year against the three newly enacted farm laws: Farmers' Produce Trade and Commerce (Promotion and Facilitation) Act, 2020; the Farmers Empowerment and Protection) Agreement on Price Assurance and farm Services Act 2020 and the Essential Commodities (Amendment) Act, 2020.

(The above story first appeared on LatestLY on Feb 06, 2021 08:35 AM IST. For more news and updates on politics, world, sports, entertainment and lifestyle, log on to our website latestly.com).