A 30-year-old man allegedly killed a infant after he failed to rape her four-year-old sister. 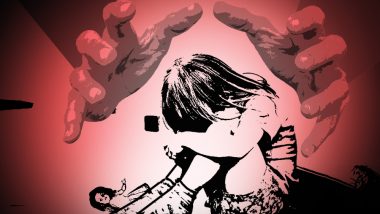 Raipur, Sep 7: A 30-year-old man allegedly killed an infant after he failed to rape her four-year-old sister. The accused, identified as Vijay Kumar Dhruv, was thrashed by locals after the incident. He is undergoing treatment and will be charged under the POCSO Act. The incident took place in a village in Chhattisgarh's Bilaspur on Wednesday.

Dhruv is a relative of the owner of the brick kiln where the victim's parents work. On Wednesday, he saw two sisters, aged three and four, playing outside their house, with their grandfather watching over them. He offered liquor of the girls' grandfather to clear his way. When the elderly man drifted off to sleep, the accused asked the two girls to follow him. Kanpur: Teenager Beaten to Death by Youth For Talking to His Girlfriend.

Dhruv took them deep into some dense bushes and suddenly tried to force himself on them. The elder girl bit his hand and managed to escape. She ran screaming all the way, and soon her parents and villagers began searching for the younger girl. They found Dhruv lying semi-conscious and the body of the little one in bushes.

According to the police, Dhruv was furious when the elder girl escaped from his clutches, so he strangled the little one to death in a revenge attack. Enraged over the incident, villagers began thrashing Dhruv. Meanwhile, someone alerted the police, and they saved the accused from being killed. "He suffered a rib fracture and is admitted to a hospital," Bilaspur SP Arif Sheikh told TOI.

(The above story first appeared on LatestLY on Sep 07, 2018 04:44 PM IST. For more news and updates on politics, world, sports, entertainment and lifestyle, log on to our website latestly.com).