China should stop building new structures if it wants to end military stand-off with India along the Line of Actual Control (LAC), Indian envoy to Beijing, Vikram Misri, said. 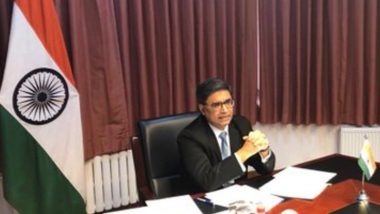 "Only way to resolve military standoff along LAC is for China to stop erecting new structures," Misri was quoted as saying. "China's claim of sovereignty over Galwan completely untenable; such exaggerated claims are not going to help," India's envoy to Beijing added. The Indian government has called China's claim over Ladakh's Galwan Valley unacceptable, accusing Beijing of attempting changes in status quo.

China had last week claimed its sovereignty over the entire Galwan Valley after Prime Minister Narendra Modi in an all-party meeting said that there are no intrusions into the Indian territory in Ladakh, and not a single Indian border post is overrun. This had led to confusion about the violent clashes between Indian and Chinese troops deployed at LAC in the Ladakh region. However, the Ministry of External Affairs has clarified that China's claims over Galwan Valley are unacceptable. Won't Allow Any Unilateral Change of LAC, Clarifies Government on PM Narendra Modi's Remark on Galwan Face-Off at All-Party Meeting.

The MEA also made it clear that the violent faceoff, in which 20 Indian soldiers were killed, had taken place due to the intrusion of Chinese troops into the Indian side of the LAC. Reiterating that the position with regard to the Galwan Valley area has been historically clear, official spokesperson of the MEA, Anurag Srivastava, said the "attempts by the Chinese side to now advance exaggerated and untenable claims with regard to the LAC there are not acceptable."

Beijing's latest claims, the government said, "are not in accordance with China's own position in the past." On Thursday, the MEA said the stopping of India's "normal, traditional patrolling pattern" in the Galwan Valley area by Chinese troops in early May led to a tense situation across the LAC and caused the relationship between two countries to deteriorate.

(The above story first appeared on LatestLY on Jun 26, 2020 08:47 PM IST. For more news and updates on politics, world, sports, entertainment and lifestyle, log on to our website latestly.com).