The Supreme Court on Monday directed all state governments and Union territories to consider the release of prisoners from jail to avoid overcrowding amid the coronavirus outbreak. 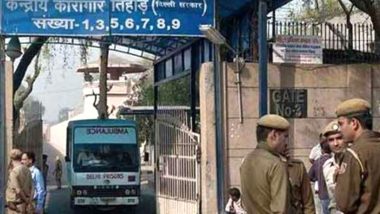 New Delhi, March 23: The Supreme Court on Monday directed all state governments and Union territories to set up high-level committees to determine the class of prisoners who could be released on parole for four to six weeks to safeguard them in the wake of the coronavirus outbreak. Coronavirus Outbreak in India: Strictly Enforce Lockdown, Take Legal Action Against Violators, Centre Tells States.

The apex court said prisoners convicted of or charged with offences having prison terms up to seven years can be given parole to decongest the jails. A bench headed by Chief Justice S A Bobde said the high-level committees would work in consultation with the state legal service authority for release of prisoners. Has Community Transmission of COVID-19 Begun? Crucial Test Tomorrow, Says ICMR.

The top court made it clear that prisoners are being released in an attempt to avoid overcrowding in jails in view of the outbreak. The total number of positive novel coronavirus cases includes 67 in Maharashtra, including three foreigners, and Kerala also at 67, with seven foreign nationals, data issued by the Ministry of Health and Family Welfare showed. Till Monday morning, Delhi had reported 29 positive cases.