COVID-19 Vaccines in India to Be Approved by February, Will Be Available to Larger Population Between April to June, Says Kiran Mazumdar-Shaw

According to the Biocon chief, AstraZeneca or Bharat Biotech are among the candidates that may clear the clinical trials by January 2021. The final regulatory approvals and authorisation of a mass vaccination programme may come at the end of first quarter of next fiscal, she said. 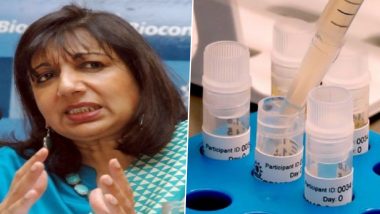 New Delhi, October 25: The vaccines against coronavirus will be approved by February and will be available in India between April to June 2021, said Kiran Mazumdar-Shaw, who heads the Bengaluru-based biopharmaceutical firm Biocon Limited. Even though the doses could be cleared for mass use mid-next year, vaccinating a population of 1.2 billion people will remain a challenge, she added. When Will India Get COVID-19 Vaccine? Here's Where AstraZeneca, Sputnik V And Other Vaccine Trials Stand in India.

Mazumdar-Shaw, while speaking to a leading daily, said the mRNA vaccines in other parts of the world could be out by December-end but they would not be beneficial for India. Storage and distribution of such vaccine requires a cold chain network where the temperature can be maintained at -80 degree celsius. Such a supply chain network cannot be handled here, she added.

According to the Biocon chief, AstraZeneca or Bharat Biotech are among the candidates that may clear the clinical trials by January 2021. The final regulatory approvals and authorisation of a mass vaccination programme may come at the end of first quarter of next fiscal, she said.

"So I would expect that in Q1FY22 we should have vaccines available in India and other parts of the world," Mazumdar-Shaw was reported as saying by The Mint. She added that the initial phase of vaccination would be based on emergency use authorization as the durability of responses needs to be assessed.

The vaccination drive would be a challenge as unlike polio vaccines, the doses to build immunity against COVID-19 could not be administered by ASHA workers, she said. The intramuscular injection could only be given by medical practitioners, Mazumdar-Shaw noted, adding that the government will have to rope in "nurses, doctors and MBBS students".

The fact that most vaccine candidates are based on the two-shot formula will make the vaccination programme more complex. Those administered with the first set of doses would be required to be administered with the second set after a month, she pointed out, adding that Aadhaar could be useful for the government in this regard.

(The above story first appeared on LatestLY on Oct 24, 2020 08:59 AM IST. For more news and updates on politics, world, sports, entertainment and lifestyle, log on to our website latestly.com).