Cyclone 'Amphan' intensified into an extremely severe storm on Monday and is all set to unleash heavy rains coupled with high-velocity winds in coastal Odisha, prompting the state government to prepare for the possible evacuation of 11 lakh people. 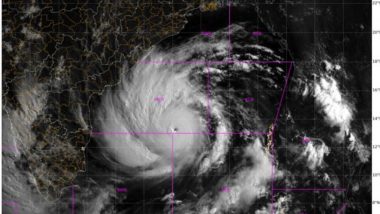 Bhubaneswar, May 18: Cyclone 'Amphan' intensified into an extremely severe storm on Monday and is all set to unleash heavy rains coupled with high-velocity winds in coastal Odisha, prompting the state government to prepare for the possible evacuation of 11 lakh people.

The extremely severe cyclonic storm 'Amphan', moving with a speed of 13 kmph over west-central and adjoining central parts of south Bay of Bengal, is likely to gain more strength and intensify further into a super cyclonic storm in the next 12 hours, the IMD said. Cyclone Amphan to Further Intensify Into 'Super Cyclonic Storm' in Next 12 Hours, Says IMD Weather Forecast.

The high-velocity winds may cause extensive damage to mud houses and partial damage to 'pucca' structures, it said. The winds may also lead to bending or uprooting of power and communication poles, minor disruption of railways and may affect overhead power lines and signalling systems and also cause widespread damage to standing crops, plantations, orchards, the IMD said.

It is very likely to move north-northeastwards across northwest Bay of Bengal and cross West Bengal Bangladesh coasts between Digha in West Bengal and Hatiya Islands in Bangladesh during the afternoon or evening of May 20 as a very severe cyclonic storm with a maximum sustained wind speed of 155-165 kmph gusting to 185 kmph, he said.

IMD Director General Mrutyunjay Mohapatra said that northern parts of Odisha are likely to be more affected due to the cyclone. Coastal districts like Jagatsinghpur, Kendrapara, Bhadrak and Balasore are likely to experience heavy rainfall accompanied by high-velocity winds, particularly on May 19 and 20, he said.

Biswas said coastal Odisha is likely to experience light to moderate rainfall in many places from the evening of May 18 with heavy rain in some places in coastal Odisha districts like Gajapati, Ganjam, Puri, Jagatsinghpur and Kendrapara.

"Greater attention is being given to the four districts of Jagatsinghpur, Kendrapara, Bhadrak and Balasore. We are keeping a close watch on these districts as the areas are likely to be more vulnerable," he said.

Chief Minister Naveen Patnaik has directed officials to prepare a plan for relocating people living in vulnerable areas to safer places along with an early restoration of affected road communication, drinking water supply, electricity, infrastructure and power supply to hospitals.