Bank officers will be losing between Rs 41,472 - Rs 148,608 based on pay scale as dearness allowance (DA) as per the wage settlement signed by the unions as against the wage deal signed by the Asian life insurance giant Life Insurance Corporation of India (LIC), said a top union leader of All India Bank Officers' Association (AIBOA). 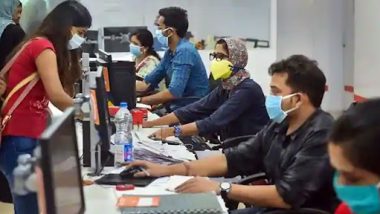 Chennai, January 22: Bank officers will be losing between Rs 41,472 - Rs 148,608 based on pay scale as dearness allowance (DA) as per the wage settlement signed by the unions as against the wage deal signed by the Asian life insurance giant Life Insurance Corporation of India (LIC), said a top union leader of All India Bank Officers' Association (AIBOA).

The AIBOA and three Members of Parliament (MP) - Communist Party of India's K. Subbarayan, Rajya Sabha MP of Congress Kumar Ketkar and Shiv Sena's Anil Desai, want the central government to rework the DA for the bankers and make it on par with the LIC employees. However, other bank unions do not expect the government to revise the DA structure for bankers like that of the LIC staffers. 7th Pay Commission: Dearness Allowance Payable to Central Government Employees Put in Abeyance? Here is a Fact Check.

In the last wage revision (April 2021), the LIC staffers were given a 0.08 per cent hike for every four point rise in the DA calculation, although the banking industry is getting only 0.07 per cent for every 4-point rise.

"The difference is worked out keeping the Basic Pay as Rs 100. The figures taken for the purpose of wage revision purposes, spread in seven scales," Nagarajan, AIBOA told IANS.

According to him, the DA difference for a basic pay of Rs 100 as at 31.01.2022 is 4.34 per cent and expected to reach minimum 5 per cent at the end of October 2022. "An officer who has retired during this period must have lost the benefit in leave encashment, gratuity and monthly pension too. An officer who has joined after 1.04.2010, the contribution to NPS scheme at 14 per cent on basic pay every month with effect from 11.11.2020 will also be the loser," Nagarajan said.

He said for future construction of new pay scales i.e for the period 1.11.2022 to 31.10.2027, there will be further difference in the pay scales. Not many bank union leaders are of the view that the central government will revise the DA as asked by AIBOA.

"This issue has to be discussed by all the bank unions in their common platform. The wage settlement has already been signed by several unions other than ours," Pradip Biswas, National Vice President, Bank Employees Federation of India (BEFI) told IANS. Biswas said the DA anomaly has been there and BEFI did not sign the wage agreement while other unions including AIBOA signed it.

The manner in which DA parity with LIC staff was demanded by the bank unions was also not liked by the insurers as well as other unions in the banking sector. "This move (difference in DA) by the Centre has created an imbalance in the entire banking and insurance sector with the LIC staffers being given a favourable treatment, ostensibly to rush through the LIC IPO (initial public offer) without much objections from its employees," said Nagarajan.

"The LIC unions, claiming to be pro-worker, seem to have quietly accepted the government's move as they have benefited in the latest wage revision... Thus, all their 'fiery opposition' to the divestment plans is now mere tokenism," Trade Union Joint Action Committee Joint-Convenor Vishwas Utagi said sharply.

Not agreeing with that, BEFI's Biswas said: "The AIIEA has been protesting against LIC's IPO. They have also chalked out further protest programmes." "Anybody can tell the bankers that LIC is on a sound financial footing as compared to public sector banks. In spite of the competition, LIC's management expense ratio is by far the lowest in the industry. So, the LIC employees deserve a good pay package," Shreekant Mishra, General Secretary, All India Insurance Employees Association (AIIEA), told IANS.

The AIIEA is a major union in LIC and also has a decent presence in the government-owned general insurance companies. The bankers seem to suffer from heartburn or indigestion with the wage revision agreement signed by the unions in the LIC and the management, Mishra said.

(The above story first appeared on LatestLY on Jan 22, 2022 04:35 PM IST. For more news and updates on politics, world, sports, entertainment and lifestyle, log on to our website latestly.com).