Delhi: 25-Year-Old Man Downs in Pool At a Farmhouse in Maidan Garhi

A man reportedly drowned in a pool at a farm house in Delhi's Maidan Garhi. The police have registered a case under section 304 of the IPC against the owner of the farmhouse. 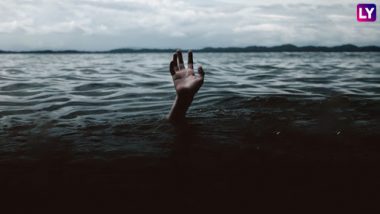 New Delhi, October 1: In a tragic incident, a man reportedly drowned in a swimming pool at a farmhouse in Delhi. The deceased, identified as 25-year-old Shubham Rawat, reportedly went for a get-together with his colleagues on intervening night of September 27 and 28 at a farmhouse in Dera village in Maidan Garhi when the incident took place. Rawat reportedly did not know how to swim. The police received information from Safdarjung hospital about a man who was brought dead, following which they reached the spot. A case has been filed against the owner of the farmhouse. Selfie Turns Fatal As 36-Year-Old Man Drowns in Sea Off Kerala's Azhimala Beach While Clicking Photos.

DCP (South) Benita Mary Jaikar reportedly told HT that their team received an information from the hospital regarding a man being brought dead on Tuesday and rushed the spot for investigating the matter. According to a report by the Hindustan Times, DCP Jaikar said, "Our team went to the hospital and collected the medical documents. Rawat, a resident of Buwa Khal village in Pauri Garhwal, lived on rent in Mahipalpur. Upon learning that the incident happened at a farmhouse, a crime team visited the spot." Himachal Pradesh: Man Drowns in Chandra Tal Lake in Spiti Valley.

DCP Jaikar told the Hindustan Times, "As it turns out, in the intervening night of September 27 and 28, Rawat and some colleagues had organised a get together at the farmhouse which had a pool in the backyard. They entered the pool and played around but after a while, most of them went back in. Later, when his colleagues noticed that Shubham was missing, they searched for him and found him in the pool". A case has been registered against the owner of the farmhouse in this context under section 304 (death by negligence).

(The above story first appeared on LatestLY on Oct 01, 2021 08:12 PM IST. For more news and updates on politics, world, sports, entertainment and lifestyle, log on to our website latestly.com).