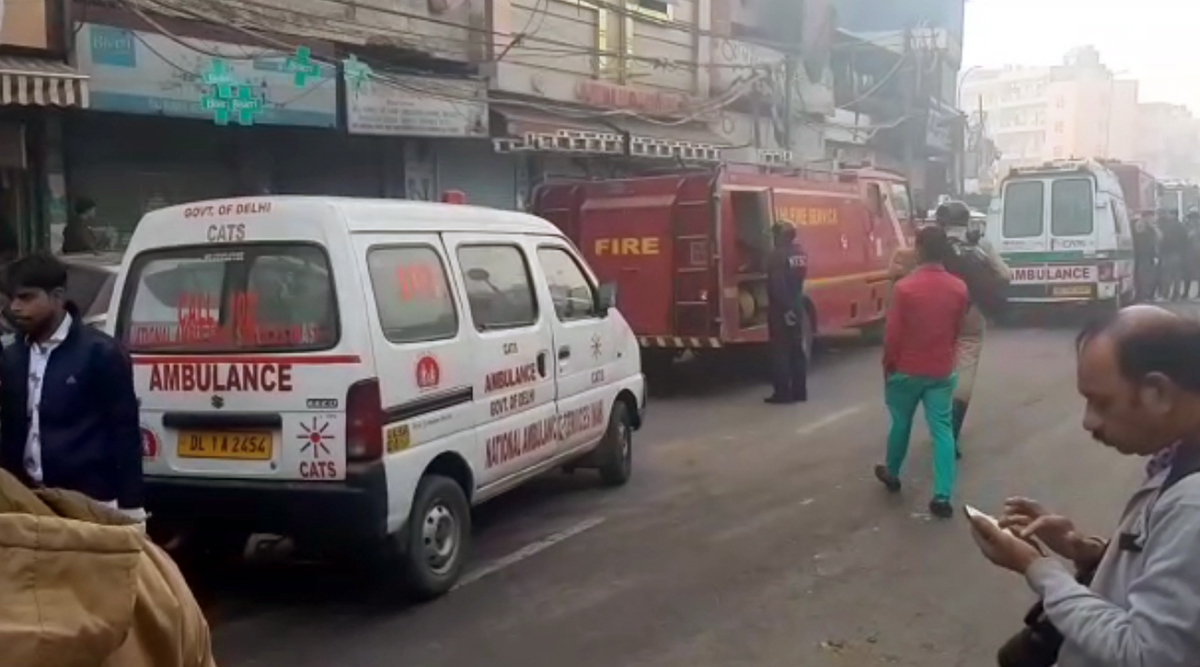 New Delhi, December 8: In the wake of the tragic fire incident in Delhi that killed 43 people on Sunday, Chief Minister Arvind Kejriwal announced a compensation Rs 10 lakhs each for the family members of the deceased and Rs 1 lakh each to those injured. The Chief Minister further announced that  all the expense of medical treatment of those injured will be taken care of by the government. A total of 43 workers died after a massive fire swept through a factory in Anaj Mandi area at Rani Jhansi Road in the national capital. A case registered under section 304 (Punishment for culpable homicide not amounting to murder) of the Indian Penal Code against owner of the building.

According to details by fire officials, the fire was reported at 5:22 AM following which 30 fire tenders were rushed to the spot. A team of National Disaster Response Force (NDRF) was also pressed into service at the incident spot to carry out the rescue operations.

Kejriwal termed the mishap as a sad incident and ordered a magisterial inquiry into it. "It is a very sad incident. I have ordered a magisterial inquiry into it. Compensation Rs 10 lakhs each to be given to families of those dead and Rs 1 lakh each to those injured. The expense of medical treatment of those injured to be borne by the govt", the Chief Minister was quoted by ANI.

Delhi CM Arvind Kejriwal: It is a very sad incident. I have ordered a magisterial inquiry into it. Compensation Rs 10 lakhs each to be given to families of those dead and Rs 1 lakh each to those injured. The expense of medical treatment of those injured to be borne by the govt. pic.twitter.com/JytAD9iMOj

Prime Minister Narendra Modi announced an ex-gratia of Rs 2 lakhs each from Prime Minister's National Relief Fund (PMNRF) for next of kin of those who have lost their lives due to tragic fire in Delhi. The Prime Minister has also approved Rs 50,000 each for those seriously injured in the fire.

Giving details about the massive fire incident, MS Randhawa, PRO Delhi Police informed that prima facie it appears short circuit caused fire. He said plastic material were at the spot which caused a lot of smoke. Randhawa added that the case has been transferred to Crime Branch and forensics team will arrive at the spot soon to ascertain the exact cause.

Kishore Singh, Medical Director, Lok Nayak Hospital, Delhi where the injured people are admitted said that the condition of those injured is not serious and they have been kept under observation. He said 34 people were brought dead to the hospital while the injured were rushed to wards for medical assistance. Singh added saying that the deaths have been mostly due to smoke inhalation and suffocation.

Prime Minister Narendra Modi condoled the deaths and termed the fire incident as an 'extremely horrific' incident. "The fire in Delhi’s Anaj Mandi on Rani Jhansi Road is extremely horrific. My thoughts are with those who lost their loved ones. Wishing the injured a quick recovery. Authorities are providing all possible assistance at the site of the tragedy", PM Modi tweeted. Union Home Minister Amit Shah took to Twitter and said the  concerned authorities have been instructed to provide all possible assistance on urgent basis.

Several people were feared trapped after blaze engulfed the Anaj Mandi at Rani Jhansi Road in the national capital. Reports informed that around 62 people were taken out by fire tenders from the building that caught fire in the wee hours. Police informed that 34 dead were confirmed by the Lok Nayak Hospital and 9 by the Lady Hardinge Hospital.