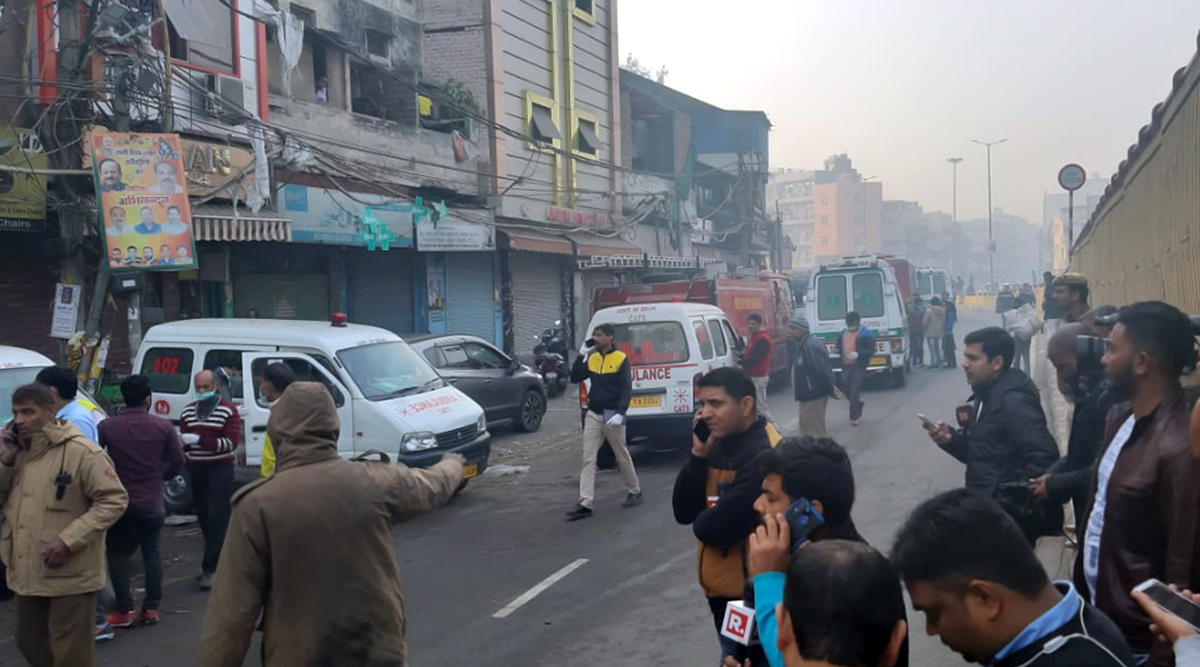 New Delhi, December 8: In a tragic incident, at least 43 workers died after a massive fire swept through a factory in Anaj Mandi area of north Delhi on Sunday morning. The blaze broke out in the market area on Rani Jhansi Road in the national capital at around 5. 22 am on Sunday. Police informed that a total of 59 people were inside the factory operating from a residential area when the blaze broke out. According to a tweet by ANI, more than 50 people have been rescued so far from the spot. The cause of the fire is yet to be ascertained.  "Till now we have rescued more than 50 people, most of them were affected due to smoke", Atul Garg, Chief Fire Officer, Delhi Fire Service said.

Prime Minister Narendra Modi on Sunday termed the fire incident in Delhi's Anaj Mandi area as extremely horrific. "The fire in Delhi's Anaj Mandi on Rani Jhansi Road is extremely horrific. My thoughts are with those who lost their loved ones. Wishing the injured a quick recovery," the prime minister said in a tweet. Meanwhile, Chief Minister Arvind Kejriwal said it is a tragic incident and said firemen were doing their best.

As soon as the incident was reported by locals, as many as 30 fire tenders were pressed into service. The rescue operation is currently underway. Several  people trapped inside were rescued and rushed to RML Hospital and Hindu Rao Hospital. According to Sunil Choudhary, Deputy Chief Fire Officer, Delhi Fire Service, the fire has been doused and the rescue operation is underway.   According to media reports, several people are still feared trapped. Delhi: Major Fire Breaks Out at a Warehouse in Ghitorni Area, Watch Video.

Take a Look at The Tweets:

Death toll rises to 43 in #Delhi fire incident, according to police. pic.twitter.com/FAYd3LNoOB

A similar incident of blaze was reported from the national capital on Friday night where a fire broke out in NBCC Tower at Bhikaji Cama Place. The blaze was brought under control at 12.30 am and no injury has been reported, police informed.

In November, a fire broke out in ITO in Delhi. The blaze engulfed the 13th floor at the office in the Sales Tax building at ITO, a Delhi Fire Service official said. Reports quoted Chief Fire Officer Atul Garg saying that the fire started in office equipment and was brought under control within 10 minutes. No injury was reported.