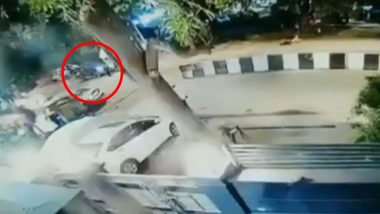 New Delhi, August 2: A 29-year-old woman driving a BMW rammed into an ice cream cart injuring four people in South Delhi on Friday night. The incident took place near Sapna Cinema in East of Kailash. The driver of the car, Roshani Arora, a resident of Faridabad who runs a boutique at Prakash Mohalla, was arrested and released on bail later. According to the Delhi Police, Roshani Arora blamed her dog for the accident. Haryana: Denied Jaguar, Youth Pushes BMW Into River in Yamunanagar.

A CCTV video of the incident showed a navy blue colour BMW car ramming into the ice-cream stall and dragging the people, who were standing near the stall on the roadside, for a short distance. The injured persons have been identified as Mukesh Kumar, sustained injury in leg, Sapana Kumari, sustained abrasion over right knee, ice cream vendor Guddu, sustained abrasion over left knee and Harshit Kaur, sustained wound at left ankle. Overspeeding Car Rams Into Students, Flings Cyclist in Cherthala, Watch Video (Graphic Content Warning).

Arora was arrested following a complaint by Mukesh. According to the police, her medical examination was conducted but no traces of alcohol were found in her body. DCP Meena said that Arora claimed that she was eating ice cream in her car, her dog jumped and the gear of the car was changed and the incident happened. The car leapt forward and hit the ice cream vendor and three other people.

(The above story first appeared on LatestLY on Aug 02, 2020 09:17 AM IST. For more news and updates on politics, world, sports, entertainment and lifestyle, log on to our website latestly.com).