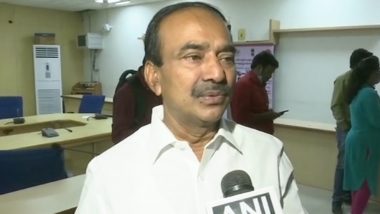 "I thought of tendering my resignation after brainstorming all aspects but I did not get that opportunity. I thought of talking to the Speaker (Pocharam Srinivas Reddy) and then directly submitting the resignation to him but could not do it as the Speaker used Covid as a ruse," said Rajender addressing the press.

Amid this backdrop, Rajender said he submitted the resignation to Assembly secretary after paying respects to Telangana martyrs at the Gun Park pylon.

Rajender complained that none of his associates were allowed into the Assembly premises and alleged that this treatment is autocratic as traditions were disregarded.

The former minister alleged that Ravinder Reddy, a four-time MLA was also not allowed into the chamber of the secretary.

"Reddy was not allowed to enter even the media point, this indicates the feudal system running here. KCR thinks why we need these MLAs, legislative bodies, what is this system of MPs and what is this Constitution," he alleged.

According to Rajender, the Chief Minister thinks that the connection between him and the masses is enough without the need of these many MLAs, ministers and our humiliation today is a reflection of that thought process.

Rajender warned the CM to end all his alleged illegal attempts on him or otherwise face a backlash.

He alleged that people are being warned in Huzurabad constituency that if they do not vote in favour of KCR, they will lose their pension, rythu bandhu, kit and kalyanalakshmi schemes.

Rajender said the CM is offering these schemes using the taxpayers money and not his own money.

(The above story first appeared on LatestLY on Jun 12, 2021 02:48 PM IST. For more news and updates on politics, world, sports, entertainment and lifestyle, log on to our website latestly.com).