Farmers' Leaders, at Meeting With Government Over Farm Laws, Once Again Have Their Own Food at Vigyan Bhawan (Watch Video)

Leaders of farmers, who are protesting against the Centre's farm laws, once again refused to have food offered by the government during the fifth round of talks on Saturday. 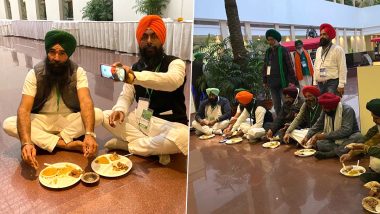 New Delhi, December 5: Leaders of farmers, who are protesting against the Centre's farm laws, once again refused to have food offered by the government during the fifth round of talks on Saturday. Farmers' leaders had food that they had carried to Vigyan Bhawan where the meeting with the government took place. A Kar Sewa vehicle was used to bring farmers' food to the venue. Bharat Bandh Called by Protesting Farmers on December 8 Demanding Complete Rollback of New Farm Laws.

Pictures shared by news agency ANI showed farmers having food sitting on the floor of Vigyan Bhawan. A video showing Kar Sewa vehicle distributing lunch was also shared. Farmer leaders had refused to accept tea or food offered by the government during the fourth round of talks with the Centre at Vigyan Bhawan on December 3. Rahul Gandhi Says PM Narendra Modi Misleading Farmers on Farm Laws, Urges Citizens to Support Protests.

They had ordered in food from the gurudwara 'langar' in Vigyan Bhawan. Previously on December 1, during a round of talks with union agriculture minister and other leaders, the farmers had refused the tea invitation from the government stating that they had come to demand their right from the government and not to drink tea.

"We want to complete rollback of the laws. If the government doesn't accept our demand, we will continue our agitation," Harjinder said. Thousands of farmers from several states have been staging protests on Delhi borders since last week and demanding repeal of three central farm laws.

(The above story first appeared on LatestLY on Dec 05, 2020 04:45 PM IST. For more news and updates on politics, world, sports, entertainment and lifestyle, log on to our website latestly.com).