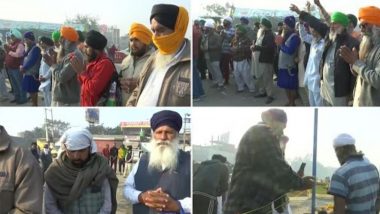 Delhi: Protesting farmers who have gathered at Singhu border (Delhi-Haryana border) offer prayers on the occasion of #GuruNanakJayanti, today. pic.twitter.com/YkXgFJhNTz

Traffic in the national capital has been affected as the Singhu and Tikri borders have been closed for movement in view of the Delhi Chalo protest by farmers. On Friday, hundreds of farmers entered the national capital to hold a peaceful protest at the Sant Nirankari Ground after facing teargas and water cannons and clashing with security personnel.

(The above story first appeared on LatestLY on Nov 30, 2020 11:12 AM IST. For more news and updates on politics, world, sports, entertainment and lifestyle, log on to our website latestly.com).