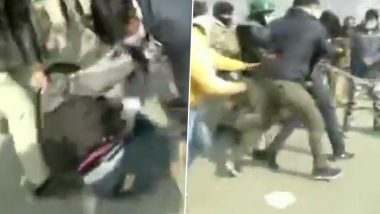 New Delhi, January 29: A tense situation prevailed at Singhu border after scuffles broke out on Friday between protesting farmers and local people who were demanding that the area be vacated. Stone-pelting incidents were also reported from the area after which the police had to resort to lathicharge and fire tear gas shells to disperse the crowd.

Police barricades were also reportedly broken. Some people were seen raising slogans against farmers and asked them to vacate the protest site. The local people who were protesting against the farmers demanding the site to be vacated raised slogans like --''Khalistan Murdabad'', "Tirange ka apmaan nahi sahega Hindustan" (India will not tolerate the insult of flag). They were also holding placards with the same slogans. Farmers' Protest: Farmers At Ghazipur Border Continue Sit-in Protest, Security Tightened at Several Places, Check Roads That Are Closed Today.

#WATCH: Delhi Police baton charges and uses tear gas shells to control the situation at Singhu border where farmers are protesting against #FarmLaws

A group of people claiming to be locals were also protesting at the site demanding that the area be vacated. pic.twitter.com/mF62LNB87j

The police and the security forces deployed at the protest site asked them to maintain peace. However, people continued to raise slogans. Security has been heightened at the Singhu border (Delhi-Haryana border).

This comes three days after the violence that broke out during the farmers' tractor rally on the occasion of Republic Day. On January 26, protestors broke barricades to enter Delhi and indulged in vandalism across several parts of the national capital during their tractor rally organised to protest against the Centre's three new farm laws.

Farmers have been protesting at the different borders of the national capital since November 26 last year against the three newly enacted farm laws - Farmers' Produce Trade and Commerce (Promotion and Facilitation) Act, 2020; the Farmers Empowerment and Protection) Agreement on Price Assurance and farm Services Act 2020 and the Essential Commodities (Amendment) Act, 2020.