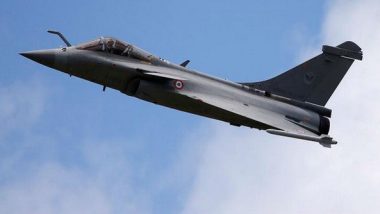 New Delhi, June 29: As expected, the twin-jet Rafale combat aircraft would be delivered to the Indian Air Force by July end, top defence officials said, adding that France, at the very beginning of the coronavirus pandemic, informed India of this delivery date.

"It would inform us of the delivery date and also if there would be any delay. As of today, everyone is expecting that it would be delivered as told by the French company," he added.

Asked about reports of July 27 as delivery date, the IAF officer said: "We are not aware." A Defence Ministry official had a similar response.

On June 2, France had reaffirmed its commitment to ensure timely delivery of Rafale aircraft despite the challenges posed by the Covid-19 pandemic. The expected date of delivery is July end.

Both ministers appreciated the efforts made by armed forces of India and France in fighting the pandemic.

The Indian Defence Ministry had then said that France had reaffirmed its commitment to ensure timely delivery of Rafale aircraft despite the challenges posed by the Covid-19 pandemic.

On October 8, 2019, Rajnath Singh flew a sortie of the inducted Rafale aircraft in France. "The new Rafale Medium Multi-Role Combat Aircraft (MMRCA) will make India stronger and will give a boost to its air dominance exponentially to ensure peace and security in the region," the minister had said during his address at the Rafale handing over ceremony at France's Merignac.

Some of the major contracts related to procurement and supply of defence equipment signed with foreign countries since 2013-14 include the joint venture for manufacturing of AK-203 rifles, agreement for manufacturing of spares, components, etc required for Russian/Soviet origin platforms and defence equipment, manufacture of Ka-226T helicopters, supply of S-400 long range surface to air missile system, the Rafale fighter jets, the M777 ultra-light howitzer, and the C-17 aircraft.

(The above story first appeared on LatestLY on Jun 29, 2020 04:59 PM IST. For more news and updates on politics, world, sports, entertainment and lifestyle, log on to our website latestly.com).