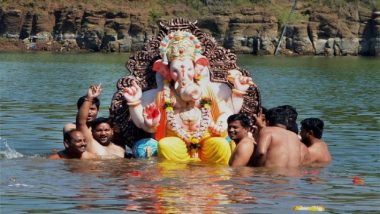 The deaths were caused primarily due to the Plaster Of Paris (PoP), which is used for preparing the idols, said Chinu Kwatra, the 27-year-old Mumbai resident who is actively involved in cleaning water bodies of the city. Lalbaugcha Raja Visarjan Route 2018: Check Full Details & Traffic Advisory on Roads Covered Under Immersion Path.

Kwatra further added that lead and chromium used for painting the idols turn fatal for the fishes, as it enters into their gills and blocks their breathing capability.

Apart from the aquatic life, tons of broken idol pieces have also been washed ashore -- which has irked the sentiments of devotees.

Environmental experts have long been advocating for the use of clay-made idols, which would dissolve into the water bodies without causing harm to the aquatic life. However, the painting and decoration on such idols remain difficult, which compels the devotees to opt for the PoP-made and lead-painted Ganesha idols.

Kwatra and his team have collected the broken pieces of idol and handed them over to the Brihanmumbai Municipal Corporation, which will chalk them safely.

A section of environmentalists in Mumbai fear a worse damage to the aquatic life on Sunday, the 11th and final day of Ganeshotsav, when all remaining Ganesha idols will be immersed.

(The above story first appeared on LatestLY on Sep 22, 2018 10:55 PM IST. For more news and updates on politics, world, sports, entertainment and lifestyle, log on to our website latestly.com).