Amid the 21-days nationwide lockdown, when there is acute liquidity crunch and the market is in doldrums, the government may borrow about Rs 40,000 crore to compensate cash-strapped states for their revenue shortfall under the GST regime. 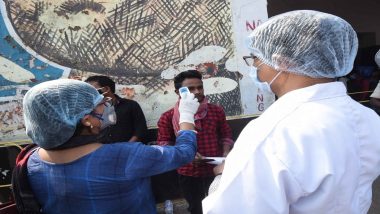 New Delhi, April 3: Amid the 21-days nationwide lockdown, when there is acute liquidity crunch and the market is in doldrums, the government may borrow about Rs 40,000 crore to compensate cash-strapped states for their revenue shortfall under the GST regime. According to a Hindustan Times report, the government plans to put up a proposal to the GST Council to borrow from the market to pay compensation to states.

Apart from the states, the government also owes money to companies across sectors for products purchased and services rendered. At a video conference with the PM, Chief Ministers of several states demanded that the Centre pay their GST compensation and sought help in coronavirus relief efforts. Citing financial crunch, several states have also announced salary cuts for their employees for the month of March.  PM Narendra Modi Holds Video Conference With Chief Ministers, Says Test, Track, Isolate & Quarantine Are Priority in Combating Coronavirus.

West Bengal has demanded that the Centre release Rs 36,000 crore under different accounts that had not been released earlier. Maharashtra chief minister Uddhav Thackeray sought the release of GST compensation worth Rs 16,000 crore. The states have also sought help regarding the procurement and manufacturing of personal protective equipment (PPE) kits and N-95 masks.

Prime Minister Narendra Modi announced a 21-days nationwide lockdown to curb the spread of the deadly disease which has already claimed 53 lives in India. The total number of infected COVID-19 people have crossed the 2,000 mark in the country. Every state is fighting a battle at their own level to defeat the pandemic from further spreading and infecting others. PM Modi will address the nation in a short video message amid the lockdown period.

(The above story first appeared on LatestLY on Apr 03, 2020 10:23 AM IST. For more news and updates on politics, world, sports, entertainment and lifestyle, log on to our website latestly.com).