A day before the Varanasi district court is scheduled to hear the civil suit on the Gyanvapi mosque-Kashi Viswanath temple complex dispute, the Hindu side has claimed that the Places of Worship (Special Provisions) Act 1991, does not bar in ascertaining the nature of a place of worship. 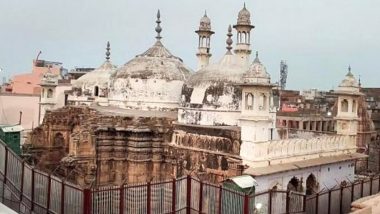 New Delhi, May 25 : A day before the Varanasi district court is scheduled to hear the civil suit on the Gyanvapi mosque-Kashi Viswanath temple complex dispute, the Hindu side has claimed that the Places of Worship (Special Provisions) Act 1991, does not bar in ascertaining the nature of a place of worship.

Speaking to IANS, advocate Subhash Nandan, representing the five Hindu women plaintiffs at the trial court, said it is important to determine the religious nature of the place and last week, the Supreme Court also made an observation that the ascertainment of the religious character of a place of worship is not barred by the Places of Worship Act, 1991.

The Hindu side had argued that then Mughal Emperor Aurangzeb had issued 'farmaans' in 1669 to destroy many temples including Kashi and Mathura, which were prominently worshipped by Hindus. The Hindu parties claimed that the then administration complied with the order and demolished a portion of temple of the Adi Visheshwar at Varanasi and later on a construction was raised which they alleged is the 'Gyanvapi mosque'. Gyanvapi Masjid Case: Varanasi Court Completes Hearing, Reserves Decision.

However, they could not change the religious charter of Hindu temple as the idol of goddess Shringar Gauri, Lord Ganesh and other associated deities continued in the same building complex.

The Hindu parties have also claimed that there are idols and objects of worship within the property in question and the temple has not lost its religious character at any point of time.

Nandan said under Hindu law, which is applied in India, it is well recognised that once the property has vested in the deity, the same will continue to be their property in perpetuity and the deity can never be divested from the property. Citing recent observations by the Supreme Court in the case, he emphasized that it is essential to determine the nature of a place of worship as on August 15, 1947. Gyanvapi Masjid Case: Supreme Court Suggests Handing Over Case to Varanasi District Judge.

On May 20, an apex court bench, headed by Justice D.Y. Chandrachud and comprising Justices Surya Kant and P.S. Narasimha said: "Ascertainment of religious character is not barred under Section 3 (of the Places of Worship Act, 1991)."

The bench had told senior advocate Huzefa Ahmadi, representing Committee of Management Anjuman Intezamia Masajid Varanasi: "Suppose there is a Parsi temple and there is a cross in the corner of the area. Does the presence of Agyari make the cross Agyari or Agyari Christian? This hybrid character is not unknown in India."

The Muslim side has challenged the maintainability of the civil suit by Hindu parties under Order 7, Rule 11 (maintainability) of the Civil Procedure Code (CPC).

The Varanasi court started hearing the case on Monday after the Supreme Court order on May 20.

The district judge has outlined the sequence of hearing -- he would first decide the sequence in which additional pleas, objections, and add-ons would be taken up.

The present civil suit has been filed by five plaintiffs -- Rakhi Singh, Laxmi Devi, Sita Sahu, Manju Vyas, and Rekha Pathak -- seeking worship at the place and seeking appointment of local commissioner to conduct an inspection.

(The above story first appeared on LatestLY on May 25, 2022 07:16 PM IST. For more news and updates on politics, world, sports, entertainment and lifestyle, log on to our website latestly.com).