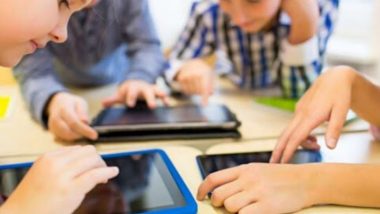 Kolkata, June 24: Students of standard VI of a leading south Kolkata girls’ school had the worst experience of virtual class when hackers intruded the session and threatened them of rape and murder. The incident took place on June 23 after which the school administration began a probe to check security breach. Soon after the intruders started writing sexual comments in the chatbox, the e-class was suspended. The Era of Online Classes: A Struggle For Kindergarten Kids, Parents And Teachers.

According to a report by Times of India, the hackers first started making indecent noise and then began threatening the girls during the e-class. Horrified, the girls muted their microphones and alerted teachers. The intruders then stopped speaking and began writing sexually loaded comments on the chatboxes. Consequently, the e-class was called off. Parents said this wasn't the first such incident. Online Classes Gone Wrong! From Students Playing Hindustani Bhau Videos & Honey Singh Songs to Naming Themselves Mia Khalifa & Making Smoke Rings, Check out Funny Virtual Class Moments Going Viral.

Initial probe found that there were two entries in the name of one student. This should have alerted teachers about possible intrusion into the e-class. "We are investigating if the passwords that are given out have been shared with others, leading to the intrusion," the secretary of the school was quoted as saying. Someone also shared videos of the incident with pictures of the girls on social media.

"The children are barely 11-years-old. Please don’t circulate the pictures," a mother appealed. Schools and colleges have been using video conferencing tools during the lockdown, however, concerns remain about their safety.

(The above story first appeared on LatestLY on Jun 24, 2020 04:30 PM IST. For more news and updates on politics, world, sports, entertainment and lifestyle, log on to our website latestly.com).