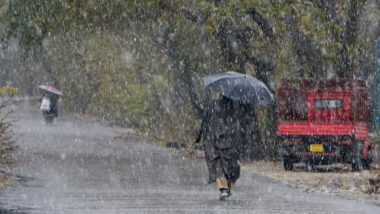 Shimla, May 18: The India Meteorological Department (IMD) on Saturday predicted rain and thundershowers accompanied with hail storms in various parts of the state in next three hours.

According to the weather forecasting agency, areas such as Shimla, Solan, Sirmaur, Mandi, Kangra, Kullu, Bilaspur, and Hamirpur will receive rainfall in the coming hours."Thunderstorm and lightning accompanied with hail and gusty winds (30-40 kmph) at isolated places very likely over Himachal Pradesh," said the IMD in its advisory.

Apart from Himachal Pradesh, others states such as Uttarakhand, Karnataka, Tamil Nadu, and Puducherry, and Kerala are also likely to receive rains followed by thundershowers later in the day, the IMD predicted.

The IMD has also predicted heat wave across coastal Andhra Pradesh and Telangana for the coming week with temperatures hovering between 45 to 47 degree Celsius.