According to aviation secretary RN Choubey, parties interested in providing WiFi connections onboard aircraft can now apply to DoT for grant of license. 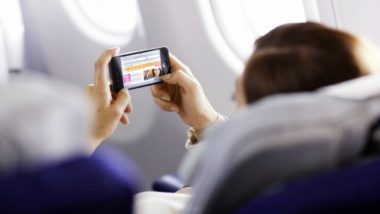 After getting the license from the DoT, parties can offer their services to airlines wishing to give onboard WiFi for flights to, from and within India. All major telecom companies such as Airtel and Reliance Jio are keen to enter the space of in-flight connectivity. The pricing of providing the services would be left to respective airlines, according to PTI sources. SpiceJet Becomes First Budget Airline to Offer In-flight Entertainment With SpicEngage Service.

According to SpiceJet, its Boeing 737 Max is equipped with SatCom that will enable internet onboard services as soon as it gets necessary approvals. Besides, Foreign airlines like Lufthansa, Singapore Airlines, Qatar Airways won't have to turn off onboard WiFi while flying over the Indian airspace. The Telecom Commission in May approved a proposal in this regard.

"Exciting times ahead in Indian skies as Telecom Commission approved data and voice services in flights over Indian airspace," Civil Aviation Minister Suresh Prabhu had said. The minister had said that he will ensure “earliest implementation” of the proposal as the government remains committed to making air travel delightful and hassle-free.

The Home Ministry has already given its nod to the proposal. The Department of Telecom had last year asked the Telecom Regulatory Authority of India to give its recommendations on licensing terms and modalities for providing in-flight data and voice services.

(The above story first appeared on LatestLY on Dec 15, 2018 08:32 PM IST. For more news and updates on politics, world, sports, entertainment and lifestyle, log on to our website latestly.com).