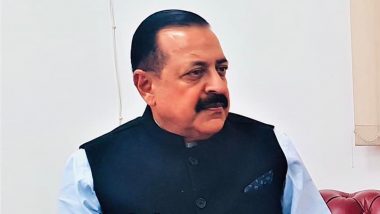 Talking to the media on the sidelines of an event here, he slammed Peoples Democratic Party (PDP) chief Mehbooba Mufti who on Saturday reiterated her call to the BJP-led Central government for holding dialogue with the people of Jammu and Kashmir, and Pakistan.

Jitendra Singh sought to know if the BJP should talk to the people of its own country or to the people of a foreign land. Online Fraud in Pune: Fraudster Cheats Woman of Rs 8.2 Lakh on The Pretext of Marrying Her.

Mehbooba Mufti, a former Jammu and Kashmir Chief Minister, has said peace would be elusive as long as Kashmir issue remains unresolved.

"If the Kashmir issue is not resolved, there will be no peace in the region and therefore it is necessary to hold talks with people of Jammu and Kashmir, and Pakistan," she had said on Saturday.

Reacting to her remark, Shiv Sena MP Sanjay Raut said the PDP chief could pass such comments as the BJP had given people like her strength by forming government with her party in the erstwhile state.

Taking a dig at Mufti, Raut had also said she was a friend of the BJP at some point of time and they formed a coalition government in Jammu and Kashmir.

The PDP has been "pro-Pakistan and sympathised with terrorists", and even as Mehbooba Mufti had supported the Parliament attack convict Afzal Guru, the BJP had formed an alliance with her to form the government in Jammu and Kashmir, Raut said.

(The above story first appeared on LatestLY on Mar 28, 2022 08:18 AM IST. For more news and updates on politics, world, sports, entertainment and lifestyle, log on to our website latestly.com).