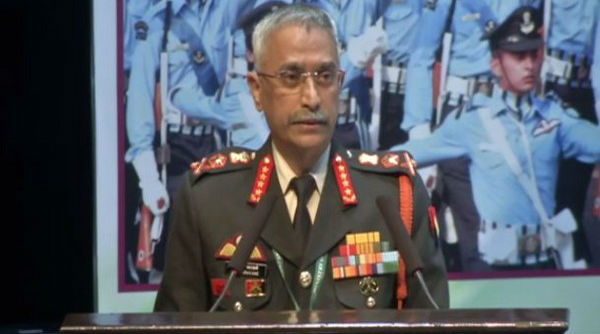 New Delhi, January 14: The Indian Army has proposed special pensions to be given to Emergency Commissioned and Short Service Commissioned officers who had fought in the 1965 and 1971 wars fought against Pakistan, Army Chief General MM Naravane said on Tuesday. The Army Chief was speaking at an event on Armed Forces Veterans Day.

"Some proposals have been sent to the Defence Ministry by Army Headquarters after due consideration which includes that the emergency Commissioned and Short Service Commission officers who took part in 1965 and 1971 war, should be given pension-like 'Swatantra Senani Samman Pension Scheme'," he said. India Asks Pakistan to Return Its Rake Used in Samjhauta Express.

The Emergency and Short Service Commission officers do not get pensions as they served and retired much before completing pensionable service. The 1965 and 1971 wars were fought by the Indian Army and the other two services and to do away with the shortage of officers, a large number of emergency and short service commissioned officers were inducted.

The Army Chief termed that veterans, "Veer Naris" and their wards as an inseparable part of the Indian Army and assured veterans that the force will continue to make efforts towards their welfare. He said that the National War Memorial dedicated to the Armed Forces by the countrymen was a tribute to their sacrifices.

Highlighting several works undertaken for the veterans last year, the Army Chief said, "Veteran, Veer Naris and your wards are an inseparable part of Army. Last year, several works were undertaken by organisations for Army Welfare. First of all -- second employment -- last year, our Army welfare placement organisation was successfull in helping 240 officers, 11,500 JCOs and other ranks (ORs) in getting a job (after retirement).

With this, they have also made a great initiative under which they help in getting government jobs by providing 3-4 months coaching. "The Army Chief further informed that a proposal has been sent to Defence Ministry under which 20 per cent more vacancies for JCOs for the honorary commission will be approved.Recalling that the year 2019 was dedicated as 'Year of Next of Kin', the Army Chief said, "Under this, Army headquarters and formations did an excellent job. To further promote this work, the year 2020 too will be dedicated "Year of NOK" as well because last year, the programs which we initiated, all of them could not be completed. That is why I have decided that this year too will be 'Year of NOK'.

"Commenting on the role of women in the Army, General Naravane said, "We are getting women into corps military police. A total of 1700 will be inducted in corps military police. Training of 101 women has already been started from 6 January this year. They will be deployed in field formations upon completion of training.

"Wishing the veterans on the New Year, the Army Chief said, "I want to assure all veterans that Army will keep trying to make your welfare better. I wish you and your family on the New Year from all ranks of the Army. I pray that you remain healthy and keep working for the betterment of the country."Speaking on the occasion, Navy Chief Admiral Karambir Singh recalled a "lesson" given to him by his flying instructor many decades ago.

"He told me - 'For a pilot, take off is optional, but my dear, landing is compulsory!'. I would say that for all of us, wearing the uniform was by choice - but retirement is inevitable - we will all be veterans one day. We should be cognisant of the responsibility for the veterans," said the Navy Chief.

Noting that the Armed Forces Veterans Day is celebrated on 14 Jan to commemorate the retirement date of Field Marshal KM Cariappa in 1953, after having served as the first Indian Chief of Army Staff since 1949, the Navy Chief lauded his leadership, direction and guidance during four years at the helm which helped establish a strong edifice of the Indian Armed Forces.

"The Field Marshal, fondly known as "Kipper" by his friends was admired by all for his dedication, discipline, integrity and forthright views. I would like to narrate two instance from his life which are testimony to "the man and his legacy"," the Navy Chief said.Admiral Singh stated that the Armed Forces Veteran Day was instituted in 2017 to celebrate and acknowledge the contributions of this giant who walked amongst men and also to acknowledge the contribution of our veterans in nation-building - both when in uniform and in the civil world. Pakistani Drone Enters Indian Air Space in Ferozepur, BSF Shoots Down The UAV.

"We will do the best to uphold the legacy you have left for us," the Navy Chief assured the veterans. "This is the information age and while a lot of good information is shared, a lot of myths and incorrect perceptions about the services are sometimes put out on social media. My request to all of you is to please use the respect that you have in society, and if there is some misconception or myth being spread please make sure that you give positive image of the services on the media," he said.