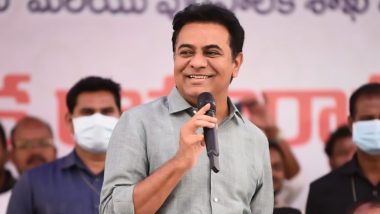 "On the one hand, the BJP Government at the Centre is constantly raising prices. But, on the other hand, it is trying to push the blame on state governments. This is blatant lying and totally unacceptable. That is why I am writing this letter to expose the inefficient policies of the Central Government which have inflated petrol rates in an unforeseen manner," he said.

"When he was in opposition, Narendra Modi shed crocodile tears over the sufferings of the poor and the plight of common people. However, he has been ruling the nation, completely ignoring the welfare of the people since he came to power. From the earliest days of Narendra Modi's swearing-in as the Prime Minister, the Central government has been making the country's people suffer with its incompetence and inefficient economic policies. The main reason behind my criticism is that petrol rates are rising daily without any control and the prices of essentials are skyrocketing," wrote KTR, as the TRS leader is popularly known.

He termed as "pure lies" the reasons cited by the Modi government for not controlling prices. COVID-19 XE Variant: Here's All You Need To Know About New Omicron Variant XE.

"BJP leaders are simply narrating stories, such as the problems in the international crude oil supply, the rise in crude oil prices, and the Russia-Ukraine war. But all this is not true. Union ministers who say prices are rising in the US, Canada, the UK, Germany, and even France are deliberately hiding that the per litre petrol rate there is lower than ours. The petro products are still available at cheaper rates in some of our neighbouring countries, including Sri Lanka, which is reeling under the financial crisis."

When the BJP government took office in 2014, the international price of crude oil was about $105. After that, due to various reasons, crude oil prices came down to below $40 a barrel at one stage. However, the BJP government has continued to raise petrol prices in the country, pointed out KTR, who is also the state's Information Technology and Industries Minister.

He alleged that the increase in excise duty during the Corona crisis is proof of the "cruelty and indifference" of the Narendra Modi government against the poor and middle class. "The price of a barrel of crude oil fell to less than $20 a barrel during the corona crisis. That should have led to a massive reduction in petrol rates in our country as well. But the ruthless Modi government, which has forced migrant workers to walk thousands of miles barefoot in the Corona crisis, has raised excise duty by Rs 20 without taking advantage of the reduced prices," wrote KTR.

"How did this happen? What are the reasons behind it? It is the responsibility of the BJP leaders to answer to the people for what purposes they are raising prices like this, he added.

"The current plight is due to the inefficient policies adopted by the BJP and its failure in managing the country's economy. The BJP leaders at the Center are lacking wealth-creating intellect. They are of the wrong impression that raising taxes exponentially with the power at hand is good governance. The useless BJP Government has levied a petro tax of Rs 26.51 lakh crore for seven and a half years on 26 crore families in the country. This means that, on average, the Modi government has looted one lakh of rupees from each family in the name of raising petrol prices. The union government and BJP leaders are answerable to the country's people," the TRS leader said.

KTR pointed out that prior to 2014, the excise duty on petrol was Rs 9.48. When Modi came to power, he increased it to Rs 32.98. It was slightly reduced last year to Rs 27.90. "The WhatsApp University batch, including Union ministers, has been spreading fake news on social media that 41 per cent of this excise duty will be returned to the states. But this is a blatant lie. Only basic excise duty is shared with the states from the total excise duty the Central government levies on petrol. At the current petrol price, the basic excise duty is only 1 rupee 40 paise. Of this, 41 per cent, which means 57 paise per litre, is distributed by the Centre to all the states. The share of Telangana is 2.133 per cent. That is 0.01 paise per litre. But the Modi government, which is levying an excise duty of Rs 28 rupees per litre, is making propaganda that it is giving a major share to the states."

"Narendra Modi, who has been doing everything to weaken the states since he came to power, is looking to fill only the central exchequer by rising petrol prices. That is why, since the BJP came to power, petro rates have been rising in the form of cess rather than tariffs. The Modi government is levying Rs 18 for roads and infrastructure development, Rs 2.5 for agricultural and infrastructure development, and Rs 11 each in the name of special additional excise duty. The cess of over Rs 30 in the name of petro prices is the highest ever in the country's history. The benefit that the states get from this is nil," he added.

(The above story first appeared on LatestLY on Apr 06, 2022 10:44 PM IST. For more news and updates on politics, world, sports, entertainment and lifestyle, log on to our website latestly.com).