He added that the government is working on a structured mechanism and package for taxi drivers, transporters, autorickshaw drivers, houseboat owners, shikarawallas and other affected people. 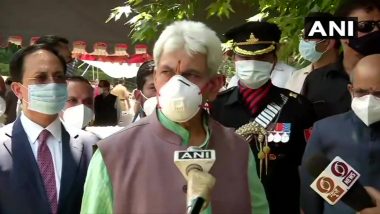 Srinagar, September 19: Jammu and Kashmir Lieutenant Governor Manoj Sinha announced a Rs 1,350-crore economic package for the Union Territory on Saturday to give a much needed boost to tourism and other sectors hit by the economic slowdown caused due to the COVID-19 pandemic and the security scenario.

As a part of the package, the government has waived 50 per cent of the electricity and water bill amounts for a year across Jammu and Kashmir with an aim to bring a huge relief to farmers, families and businesses.

Sinha also hinted that the Centre is actively considering an "unprecedented and historic package" for assistance to business entities, which will cover both the existing and new enterprises and will be a big boost to business and industry in Jammu and Kashmir. Manoj Sinha Announces Rs 1,350 Cr Economic Package for Jammu and Kashmir, 50% Discount for a Year in Electricity and Water Bills; Check Highlights of the Package.

Announcing this, the LG said, "You know that at the most, a two-per cent interest subvention is provided and that is what the people expect as well. However, keeping in mind the special situation here -- businesses have been suffering for the last about 20 years -- we have decided to give an interest subvention of five per cent without any discrimination to all businesses whether small, medium or heavy. This is an unprecedented decision."

He said the Union Territory administration will directly support this with Rs 950 crore. Sinha also announced that stamp duty has been exempted in case of all borrowers up to March next year. He said the new economic package is apart from the package announced by Prime Minister Narendra Modi under the Aatmanirbhar Bharat Abhiyaan.

"Overall, this economic package is historic in terms of volume and reach. I can see that Kashmiris are eager to contribute to the growth of the Union Territory as they are fed up with the cross-border terrorism sponsored by our neighbour.

"I strongly feel that it is our collective responsibility to ensure that a lot of money goes into creation of jobs, strengthening of businesses and coming together of families for a quick bounce-back of Jammu and Kashmir's economy. I have twin objectives -- ensure more money in people's pockets and offer more opportunity for the revival of Jammu and Kashmir's economy," Sinha said while making his agenda open to the people of the Union Territory.

"Green shoots of economic revival are visible and I am confident that with this package, we will be able to steer Jammu and Kashmir through the current crisis," he said.

The LG said under the Aatmanirbhar Bharat Abhiyaan, Rs 1,400 crore have already been provided to people through the Jammu and Kashmir Bank.

He added that the government is working on a structured mechanism and package for taxi drivers, transporters, autorickshaw drivers, houseboat owners, shikarawallas and other affected people.

"We are setting up a customised help tourism scheme by the Jammu and Kashmir Bank for financial assistance to persons associated with the tourism sector with attractive pricing and repayment features. We are setting up an exclusive land bank and will make available land for warehouses in industrial estates and food parks," Sinha said.

He also announced that those associated with the handloom and handicraft sectors will get an enhanced credit of Rs 2 lakh in their credit cards as also a seven-per cent interest subvention to improve these sectors, which are famous the world over.

The Jammu and Kashmir Bank will start a special desk from October 1 for youth and women entrepreneurs, he said. The LG had constituted a committee on August 18 to assess the help required by the business community of Jammu and Kashmir and also suggest administrative measures to boost banking, industry, tourism, agriculture and handicrafts.

The committee headed by K K Sharma, the advisor to the LG, submitted its report on September 1 after deliberations with at least 35 business organisations from Srinagar and Jammu. Jammu and Kashmir: 3 LeT Terrorists Held in Rajouri District, More Details Awaited.

The drafted recommendations, which have been accepted by the LG, will eventually empower Kashmiris, especially those who have lost their businesses and livelihoods, besides providing a conducive environment for various other industries to complement the prime minister's visions of "Vocal for Local", "Make in India" and "Make for World".

Since taking over as the LG of Jammu and Kashmir last month, Sinha has cleared a slew of game-changer schemes to bring administration to the door of the people and rebuild trust and faith in administration.