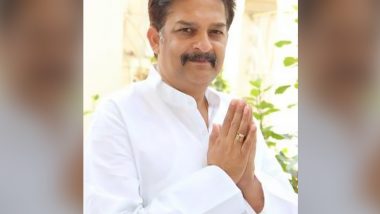 As the legislature session was in progress, TV channels beamed the clip, each claiming the footage to be "exclusive." Rathod on his part denied that he ever watched obscene clips in public places like the House. He said that what is being alleged is far from the truth. "I did not watch any video. During the Question Hour, I was to ask Question number 7. I was trying to see a message, whether I had received an answer for my question or not. At that time I realised that my phone was cluttered with messages, that is when I was trying to delete some messages because my mobile storage was full," he explained.

He added that some TV channels cameramen perched behind him recorded and claimed that he was watching some objectionable content. "This is not true. There is no obscene content in my phone," he declared. The Karnataka legislature is not new to such controversies. BSP Legislature N Mahesh Caught Watching Pictures of Girls Inside Karnataka Assembly; Here's What He Said When Asked About It.

After this, TV cameramen captured former Congress minister, U. T. Khader scrolling through his phone and seeing a girl's photograph in 2016, but it turned out to be his daughter's photograph, who had sent it to him on his phone. In 2018, the lone BSP MLA (now expelled from the party), N. Mahesh was caught on camera browsing through several girls' photographs on his phone, that turned out to be photos of prospective brides for his son sent by his relatives. In both the episodes, the MLAs had flayed the media for maligning them and their family members by telecasting the incident.

(The above story first appeared on LatestLY on Jan 29, 2021 09:02 PM IST. For more news and updates on politics, world, sports, entertainment and lifestyle, log on to our website latestly.com).