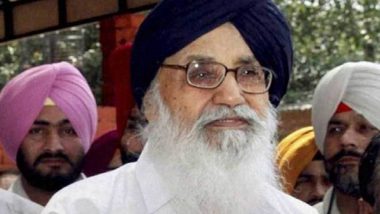 Chandigarh, June 20: Five-time Punjab chief minister and Shiromani Akali Dal (SAD) leader Parkash Singh Badal will appear before a Special Investigation Team (SIT) probing the Kotkapura police firing case of 2015 at his residence here on June 22. Earlier, Badal had expressed inability to appear before the panel on June 16, citing ill-health and his age.

In his two-page response to the summon from the SIT investigating the handling of the Kotkapura incidents by the previous government, Badal last week said, "the entire process of investigation already stands brazenly compromised through blatant and unapologetic political interference and it reeks too strongly of political vendetta to inspire any confidence about a fair process of law being followed." Parkash Singh Badal Returns Padma Vibhushan to Protest Against 'Betrayal of Farmers' by Government.

In spite of this, Badal had said, he will "cooperate fully" with the investigative process. The former chief minster had also pointed out that the very need for the present SIT has "arisen out of the brazen politicisation of the case by the previous SIT". In this regard, Badal had come down heavily against "one of the members of the previous SIT" for his "openly political conduct" which had allegedly subverted the entire investigative process.

"With callous and contemptuous disregard for all the established procedures and norms, this officer completely usurped and appropriated to himself the entire functioning and designated role of all other members of the SIT, including its chairman, and rendered them totally redundant," Badal had said.

Badal was the chief minister of Punjab when the police had opened fire on protesters in Kotkapura on October 14, 2015, killing two and injuring others. The SIT is to ascertain as to who gave the orders to open fire, whether the cops fired in self-defence and if standard operating procedure was followed.

(The above story first appeared on LatestLY on Jun 20, 2021 04:50 PM IST. For more news and updates on politics, world, sports, entertainment and lifestyle, log on to our website latestly.com).