Madhya Pradesh: Man Posing For Video Dies After Being Hit by Train in Hoshangabad 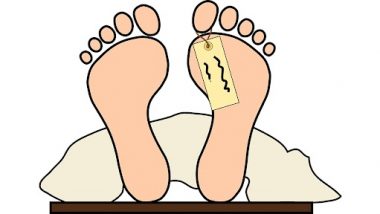 Hoshangabad, Nov 23: In a tragic Incident, a man died after being hit by a train while posing for a video along a railway track in Madhya Pradesh's Hoshangabad district, police said on Monday. The deceased man was 22-year-old.

The incident occurred on Sunday on Itarsi-Nagpur rail route and the deceased has been identified as Sanju Choure, a resident of Panjara Kala village, Police said. Uttar Pradesh Accident: 3 Cousins of Bride Killed After Truck Hit Their Bike in Agra

Police Said that Sanju Went very close to the track despite seeing the train approaching as he wanted to do something daring and upload it on his social media accounts.

According to the police “The man was shooting a video along with his friend for uploading on social media accounts when he was hit by a train in Sharaddev Baba area at around 5:30pm. He was rushed to a hospital where doctors declared him dead on arrival.” Hyderabad Shocker: Man Kills 4-Year-Old Nephew Over Grudge Against His Mother in Jalpally

In a video that went viral on social media, the deceased Sanju can be seen near the track even as a goods train is seen approaching with its driver blowing the horn. He can also be seen being hit by the train in the Video. A case has been registered and further probe is underway.

(The above story first appeared on LatestLY on Nov 23, 2021 01:28 PM IST. For more news and updates on politics, world, sports, entertainment and lifestyle, log on to our website latestly.com).