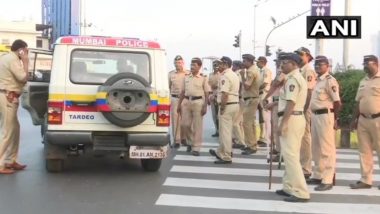 Mumbai, April 10: The Mumbai Police on Friday cracked the whip against fake content on social media and Group Admins of WhatsApp groups will be personally liable if such misleading stuff is found circulating.

The city Commissioner of Police has issued orders - valid from April 10 to April 24 - prohibiting any kind of fake or distorted information on all social media like WhatsApp, Twitter, Facebook, TikTok, Instagram, etc. Maharashtra Issues Advisory for WhatsApp Users and Admins During COVID-19 Pandemic, Here Are the Dos and Don’ts You Should Follow Amid Coronavirus Crisis.

It has also banned derogatory or discriminatory messages towards any community, or causing panic and confusion among the people, said the order signed by Deputy Commissioner of Police (Operations) Pranaya Ashok.

The order also prohibits any attempts to incite mistrust against the government officials or their acts to prevent the spread of coronavirus and such messages causing danger to public health or safety or public peace.

In order to curb the spread of misleading, provocative & derogatory messages on social media & messaging applications, strict action will now be taken against designated ‘admins’ of the platforms that are found guilty of indulging in the same.#TakingOnCorona (1/2)

For all such acts by any person or groups, the person designated as "Group Admin" shall be held personally liable for such content in his/her group and attract action under the relevant laws, warned DCP Ashok, who is also the Mumbai Police official Spokesperson.

As a fallout of the orders, the state police have arrested 39 persons for propagating fake news, rumours and hate speeches, while 33 others identified would face action, said Superintendent of Police Balsing Rajput.

Since the first day of lockdown, the state police has registered 161 such cases over social media content, including 30 in the past 48 hours, with WhatsApp, Facebook and TikTok being the favourite of the miscreants, he added.

We appeal all citizens to act responsibly & refrain from sharing any such content and urge ‘admins’ to moderate all content being shared.

Any violation should be brought to our notice immediately. We promise to take action while protecting your anonymity.#TakingOnCorona (2/2) pic.twitter.com/lpEVyZcAyO

"The perpetrators are mainly spreading rumors about Covid-19 and its treatment. There are rising trends in hate speech cases, out of total registered cases, 73 cases about hate speech over social media," Rajput said. Sharing Coronavirus Joke in WhatsApp Group Can Land You in Jail? Viral Post Asking Admins to Shut Groups For Two Days is Fake.

Besides launching awareness efforts to sensitize people, police are also sounding out various platforms and intermediaries to filter the fake news videos or posts to reduce their spread, the officer said, urging people to guard against such content.

(The above story first appeared on LatestLY on Apr 10, 2020 11:08 PM IST. For more news and updates on politics, world, sports, entertainment and lifestyle, log on to our website latestly.com).