Vehicular movement was disrupted and several areas were waterlogged after heavy rains continued to lash Mumbai and surrounding areas on Friday. 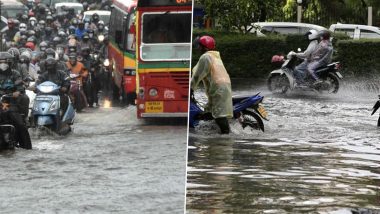 For decades, @mybmc has been unable to fix the flooding at King's Circle, Matunga. See the situation today.

And we are the richest civic body in the entire country.

Mumbai, especially its suburbs, have been receiving heavy rains since early morning. According to the BMC, in the past 24 hours, the city has received 64.45 mm rainfall with 127.16 mm in its Western Suburbs and 120.67 mm in the city's Eastern Suburbs. The National Disaster Response Force (NDRF) has rushed three teams to Mumbai to tackle waterlogging in several parts of the city.

#WATCH : In view of orange alert for Mumbai by IMD 3 teams of NDRF has been shifted from Pune to Mumbai as precautionary measure today.@IMDWeather #Mumbai #MumbaiRains #Monsoon #Monsoon2021 #pune pic.twitter.com/bij9X5bjEA

Following heavy downpour, Tulsi lake, one of the two lakes that supplies water to the BMC area started overflowing due to rains. Mithi river also swelled up after which nearly 250 residents of a slum-dominated area in Mumbai's Kurla were evacuated.

"People residing in Kranti Nagar, a slum-dominated area in Kurla west, located along the bank of Mithi river, were shifted to nearby municipal schools after its water level touched 3.7 metres in the morning with its danger mark being 4 metres," official of the Brihanmumbai Municipal Corporation (BMC) was quoted by news agency PTI as saying. Meanwhile, the IMD has predicted moderate rain in the city and suburbs with possibility of heavy rainfall at isolated places.

(The above story first appeared on LatestLY on Jul 16, 2021 04:40 PM IST. For more news and updates on politics, world, sports, entertainment and lifestyle, log on to our website latestly.com).