Observing that use of poisonous snakes to kill people has become a new trend, the Supreme Court on Wednesday denied bail to an accused from Rajasthan. 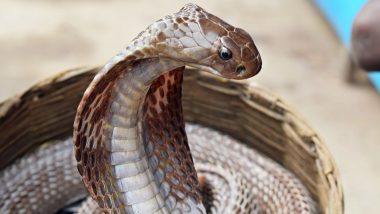 New Delhi, October 7: Observing that use of poisonous snakes to kill people has become a new trend, the Supreme Court on Wednesday denied bail to a person from Rajasthan who is one of the accused in murder of an elderly woman. Krishna Kumar, who allegedly had accompanied one Manish when he had gone to buy a snake to kill his lover's mother-in-law, approached the Supreme Court seeking bail. Uthra Murder Case: Live Snake Bites Woman's Dummy in Police's Crime Scene Reconstruction Video.

"This is a new trend that people bring poisonous snakes from snake charmers and kill a person through snake bite. This is now becoming common in Rajasthan," Justice Surya Kant remarked, as reported by NDTV. He, along with Chief Justice NV Ramana and Justice Hima Kohli, was hearing the bail plea of Kumar. The bench said the accused allegedly provided the murder weapon (snake), hence, cannot be granted bail. Cobra Remains Wrapped Around Girl's Neck for Nearly 2 Hours Before Biting Her in Maharashtra Village.

"You have used an innovative method to commit a heinous crime. You were allegedly part of the conspiracy and provided the murder weapon (snake) after procuring it from the snake charmer. You do not deserve to be released on bail at this stage," the bench was quoted by Times of India as saying. The murder took place in a village in Jhunjhunu district of Rajasthan in 2019. According to reports, prime accused Manish had an affair with Alpana, who was married to Sachin, an Army jawan.

When Alpana's mother-in-law Subodh Devi learned about their affair, Alpana and Sachin allegedly decided to eliminate her. Sachin and his friend Kumar had bought a snake for Rs 10,000 from a snake charmer. On June 2, 2019, Subodh Devi was bitten by a snake. Weeks after Subodh Devi's death, her family became suspicious of Alpana and eventually lodged a complaint.

(The above story first appeared on LatestLY on Oct 07, 2021 10:25 AM IST. For more news and updates on politics, world, sports, entertainment and lifestyle, log on to our website latestly.com).