After facing criticism, Delhi's Govind Ballabh Pant Institute of Post Graduate Medical Education & Research (GIPMER) on Sunday withdrew its circular directing all its nursing personnel to use only Hindi and English for communication. 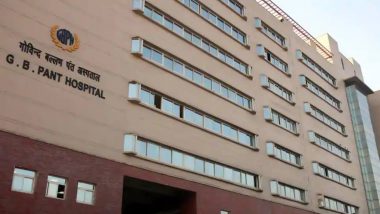 New Delhi, June 6: After facing criticism, Delhi's Govind Ballabh Pant Institute of Post Graduate Medical Education & Research (GIPMER) on Sunday withdrew its circular directing all its nursing personnel to use only Hindi and English for communication. The hospital administration clarified that the circular was issued without their information. An official order withdrawing the circular will be issued soon

The GIPMER had reportedly received a complaint against the use of the Malayalam language during a vaccination programme. In the circular, the Nursing Superintendent of the hospital said that "serious actions" would be taken against anyone found speaking in other languages. Delhi's GB Pant Hospital Directs Nurses to Communicate Only in Hindi, English Amid Complaint Against Malayalam Use.

The circular read, "A complaint has been received regarding the Malayalam language is being used for communication in working places in GIPMER. Whereas maximum patient and colleagues do not know this language and feel helpless causing a lot of inconveniences." Delhi Government Hospital Bars Nurses from Talking in Malayalam at Work, Union Fumes.

According to reports, the Delhi Health Department had also issued a memo to the hospital. Congress leader Rahul Gandhi slammed the Hospital authorities for issuing the circular. Gandhi, in a tweet, said, "Malayalam is as Indian as any other Indian language. Stop language discrimination!"

Commenting on the matter, Congress MP KC Venugopal urged Union Health Minister Harsh Vardhan to order an immediate withdrawal of the "bizarre" and "unconstitutional" circular issued by the authorities of GIPMER. Congress Lok Sabha MP from Thiruvananthapuram Shashi Tharoor called the circular and a violation of the basic human rights of Indian citizens.

(The above story first appeared on LatestLY on Jun 06, 2021 12:12 PM IST. For more news and updates on politics, world, sports, entertainment and lifestyle, log on to our website latestly.com).