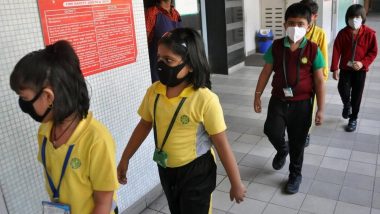 Earlier when the AQI in the city crossed the 400 mark, the rules of GRAP 4 were implemented and online class was started by closing the schools. Delhi Air Pollution: Quality of Air Slides Into ‘Very Poor’ Category With 326 AQI; Noida, Gurugram AQI Remain ‘Very Poor’.

As per the new order issued by the District Magistrate, Gautam Buddh Nagar, Suhas L.Y., the schools of the children will open from Wednesday.

The District Magistrate in his order has given strict instructions to the officers to control pollution. On Sunday, under the chairmanship of Gautam Buddh Nagar District Magistrate, a meeting was held with all the district level officers for effective control of air pollution in the city.

The District Magistrate instructed everyone that compliance of the instructions of CAQM should be ensured. He said that stage 4 of GRAP has been removed. Thereafter, all the provisions and restrictions applicable in GRAP 3 should be kept in force on the ground.

According to the District Magistrate's order, compliance of all the provisions applicable in GRAP 3 such as conditional prohibition on construction and demolition activities will be kept in effect. UP Shocker: Cops Beat Women With Lathis, Hurl Abuses During Protest Over Vandalism of BR Ambedkar’s Statue in Ambedkar Nagar; Call It ‘Minor Force’ (Watch Video).

In addition, it should be ensured by all the authorities and urban local bodies that the work of mechanical sweeping, road washing and water sprinkling is done regularly.

According to the order, it should be ensured by all the authorities that according to the instructions received from CAQM, all the projects and construction activities of more than 500 square meters should be compulsorily registered on the UP Environment Compliance Portal.

(The above story first appeared on LatestLY on Nov 07, 2022 12:07 PM IST. For more news and updates on politics, world, sports, entertainment and lifestyle, log on to our website latestly.com).