Odisha: Migrant Labourer Forced to Stay in Jungle After Being Denied Entry to Quarantine Centre And His Village at Behrampur 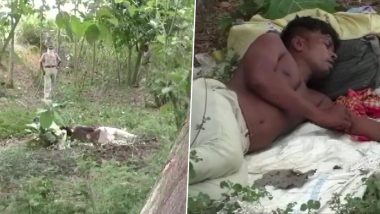 Ganjam, June 6: A migrant labourer was forced to spend two days in a forest after he was allegedly denied admission to the quarantine centre and his village. The incident took place in Behrampur in Odisha's Ganjam district. The labourer had come to his native village in Behrampur from Chennai amid the coronavirus lockdown. He had to go to the jungle when authorities allegedly refused to keep him at the quarantine centre. His village also boycotted him. Govt Bus Services to Resume on Monday in Odisha.

"He came from Chennai and went to the police and block office. But no one helped. Then, he went to the jungle," a local resident told news agency ANI. After pictures of the labourers sleeping in the forest surfaced, the police swung into action and shifted him to a quarantine facility. In pictures, shared by ANI, the labourer can be seen resting on the ground in the forest. Odisha: 15 People of Koya Tribal Community Died Due to 'Mysterious Disease' in Past 3 Months in Malkangiri District; Chief Medical Officer Says People Are not Co-operating' in The Probe.

(The above story first appeared on LatestLY on Jun 06, 2020 10:52 PM IST. For more news and updates on politics, world, sports, entertainment and lifestyle, log on to our website latestly.com).