In the video clip, Arinjay Jain, the owner of Paras Hospital, can be purportedly heard saying that the hospital suspended oxygen supply on April 27 for five minutes in a "secret mock drill". 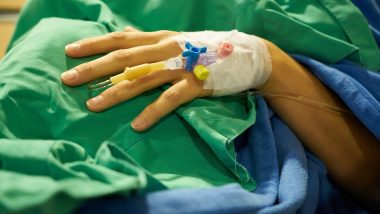 Agra, June 8: The Uttar Pradesh government has ordered a probe after an alleged video clip of the owner of a prominent private hospital in Agra went viral. In the video clip, Arinjay Jain, the owner of Paras Hospital, can be purportedly heard saying that the hospital suspended oxygen supply on April 27 for five minutes in a "secret mock drill", which may have resulted in deaths of 22 people. He is not seen in the video. Agra: 8 COVID-19 Patients Die at Paras Hospital Allegedly Due to Oxygen Shortage.

Arinjay Jain is heard telling some people that his hospital was facing an acute shortage of oxygen on April 27, and the hospital was told to discharge patients but no one was ready. "Then I decided to try something out - a mock drill of sorts - and asked the staff to identify those whose oxygen supply can be cut. That way, we will get to know who will die and who'll survive. The mock drill happened at 7 am, no one knows about this," he can be purportedly heard saying in the viral audio. Agra's Paras Hospital 'Spreads' Coronavirus to Other Districts With Negligence in Revealing Details of Staff And Patients, FIR Registered.

"Twenty-two patients started gasping for breath and their bodies began turning blue. We came to know that they will not survive," Jain allegedly adds. After the video surfaced, Agra District Magistrate Prabhu N Singh issued a statement denying that 22 people had died at Paras Hospital on April 27. Singh, however, admitted that there was oxygen shortage, which he claimed, was sorted out within 48 hours.

"Initially, there was some panic and shortage but we sorted all that out in 48 hours. In this hospital, there have been seven COVID deaths on the 26th and 27th of April. The hospital also has a lot of other ICU beds. There is no truth that 22 people died but we will carry out an inquiry," DM Singh said.

(The above story first appeared on LatestLY on Jun 08, 2021 09:36 AM IST. For more news and updates on politics, world, sports, entertainment and lifestyle, log on to our website latestly.com).