A major power breakdown crippled Mumbai and the Mumbai Metropolitan Region of Thane, Raigad and Palghar on Monday owing to a grid failure, officials said here. 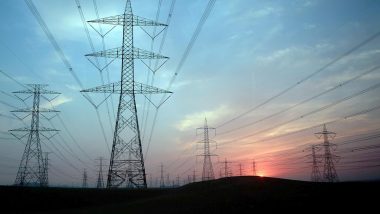 Mumbai, October 12: A major power breakdown crippled Mumbai and the Mumbai Metropolitan Region of Thane, Raigad and Palghar on Monday owing to a grid failure, officials said here. One of the distributor, BEST, said the power supply was "interrupted due to TATA's incoming electric supply failure" at around 10:15 am.

The power breakdown hit the lifelines of Mumbai -- Central Railway and Western Railway -- with all local trains halting en route till Vasai and Diva. Mumbai Power Cut Update: No Electricity in Mumbai, Thane, Navi Mumbai And Other Areas Due to Power Grid Failure; Here's What We Know So Far.

Hapless commuters at many locations jumped down and started walking down to the nearest suburban railway station.

A BMC Spokesperson said the power outage was due to the Central Grid failure of the Tata Power at Kalwa, Thane, and restoration could take around an hour.

"In view of interruption in Traction power at 10.05 hours due to Grid failure of Tata Power company, services between Churchgate and Borivili are suspended. It shall be resumed as soon as traction power supply is restored," a WR Spokesperson Sumit Thakur said.

However, power supply, from MSETCL was available at Vasai Road and it has been extended to work essential suburban trains between Borivili to Virar section, he added.

Efforts were also underway to start services in Churchgate-Borivali section. Commuters were requested not to panic and maintain social distancing.

The power failure had other impact like hitting water supply schedules, lifts getting stuck in some buildings, traffic signals leading to chaos on roads, etc.

(The above story first appeared on LatestLY on Oct 12, 2020 11:50 AM IST. For more news and updates on politics, world, sports, entertainment and lifestyle, log on to our website latestly.com).