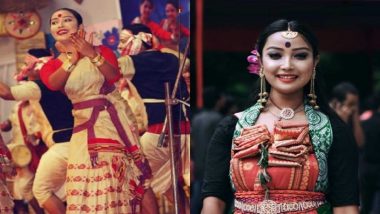 Guwahati, June 28: A woman student was killed in a landslide near the Raj Bhawan here, prompting the administration to ask people living in vulnerable areas to move to safer places," officials said. The administration also closed down a hospital temporarily near the Raj Bhawan, they added. Assam: 20 People Killed in Landslides in Cachar, Karimganj And Hailakandi Districts; Several Injured.

The Governor's Residence located in Kharghuli area of the city, however, is safe, they added. Another incident of landslide took place at Gita Nagar locality, but no casualty was reported from there. Union Home Minister Amit Shah called up Assam Chief Minister Sarbananda Sonowal and assured him of all help to the state.

Officials said the college student - Priyanka Boro, who was also an accomplished dancer, was just outside her home when a huge chunk of landmass from the hill above came down and buried her under it, killing her instantly.

"Due to incessant rainfall for the last few days in Guwahati city, several incidents of landslides have occurred, leading to loss of lives and property. Moreover, there is every possibility of occurrence of more such landslide incidents in the coming days," an official said.

The authorities of Kamrup Metropolitan district, which primarily comprises Guwahati city, ordered the closure of Borthakur Clinic and Hospital at Kharghuli and asked for shifting of its patients to nearby facilities immediately. The hospital is located near the Raj Bhawan.