The terrorist responsible for the killing of Jammu and Kashmir police personnel Reyaz Ahmad was among three LeT terrorists neutralized in an overnight encounter with security forces at Drabgam area in South Kashmir's Pulwama district, officials said on Sunday. 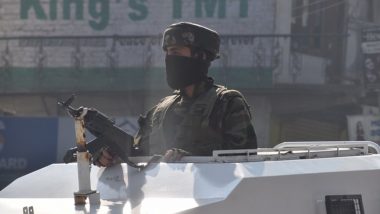 Srinagar, June 12: The terrorist responsible for the killing of Jammu and Kashmir police personnel Reyaz Ahmad was among three LeT terrorists neutralized in an overnight encounter with security forces at Drabgam area in South Kashmir's Pulwama district, officials said on Sunday.

"Yesterday, at about 1855 hrs, acting on specific information generated by Police regarding presence of terrorists in village Drabgam area of Pulwama, a joint cordon & search operation was launched by Police, Army (44RR) and CRPF (182/183Bn) in the said area," police said.

During the search operation, as the joint party approached towards the suspected spot, the hiding terrorists fired indiscriminately upon the joint search party which was retaliated effectively leading to an encounter.

"In the ensuing encounter, three local terrorists of proscribed terror outfit LeT were killed and their bodies were retrieved from the site of encounter," police said. Jammu & Kashmir: 3 LeT Militants, Associate Arrested for Sarpanch’s Murder in Baramulla District.

They have been identified as Junaid Ahmad Sheergojri of Gadoora, Pulwama, Fazil Nazir Bhat of Drabgam, Pulwama and Irfan Ahmad Malik of Arabal Nikas, Pulwama.

"As per police records, all the three killed terrorists were part of groups involved in several terror crime cases including attacks on Police/Security Forces and civilian atrocities. The killed terrorist Junaid Sheergojri along with his associate Abid Hussain Shah of Monghama Pulwama, who stands neutralised on 30/05/2022, was involved in killing of police personnel Reyaz Ahmad at his residential house on 13th May 2022. Besides, he was also involved in recent attack on outside labourers at a brick kiln in Chadoora on 02/06/2022 in the outskirts of Pulwama-Budgam axis in which one labourer was killed and others injured," police said.

Incriminating materials, arms and ammunition including two AK-47 rifles and one pistol have been recovered from the site of encounter.

Meanwhile, Inspector General Police Kashmir zone Vijay Kumar has congratulated the joint teams for carrying out the anti-terrorist operation in professional manner without any collateral damage. He also appreciated the joint team for tracking and neutralizing the terrorists involved in the recent killing of policeman in Pulwama.

Police have registered a case and investigation has been initiated.

(The above story first appeared on LatestLY on Jun 12, 2022 04:57 PM IST. For more news and updates on politics, world, sports, entertainment and lifestyle, log on to our website latestly.com).