After waiting for more than two months, with no relatives coming to pick even the 'asthi' (Potful ash and bone remnants), Karnataka revenue minister, R. Ashoka has performed last rites of over 1,000 'Asthis' in triveni sangama in Srirangapattana here. 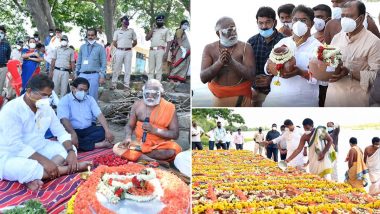 Mandya, June 3: After waiting for more than two months, with no relatives coming to pick even the 'asthi' (Potful ash and bone remnants), Karnataka revenue minister, R. Ashoka has performed last rites of over 1,000 'Asthis' in triveni sangama in Srirangapattana here.

After performing the last rites, Ashoka tweeted saying that he was content in performing last rites of departed souls. "I did this to allay fears of relatives, who do not even come near crematoriums after the body is cremated. I direct deputy commissioners to perform last rites in all districts if the such Asthis have remained unclaimed for while," he said in his tweet.

"Asthi Visarjan is a very important religious process as per Hindu religious tradition. The meaning of Asthi is the leftover bone or some collected ashes of dead people. After the last rites are performed the remains of the dead person are collected, these are mostly tied in a piece of cloth. In the end, the immersed ashes will flow in quiet water like a river. This overall process of immersion is called "Asthi visarjan"," the government officers told IANS.

He added that Srirangapatna is considered to be one of the holiest sites to perform these last rites.

According to him, these Asthis were taking space in all 11 crematoriums of Bengaluru, where Covid patients were cremated.

"This was an unforeseen circumstance, despite our best efforts we could not reach out to relatives as their mobile phones mostly remained switched off or never picked up. As a result of this, we were having space shortage to store new Ashtis, therefore, after taking all precautions and measures we decided perform last rites of around 1,000 Asthis of the nearly 1,500 Ashtis which have remained unclaimed till date," the officer said.

(The above story first appeared on LatestLY on Jun 03, 2021 09:48 AM IST. For more news and updates on politics, world, sports, entertainment and lifestyle, log on to our website latestly.com).