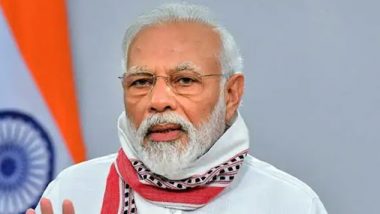 Meanwhile Defence Minister Rajnath Singh tweeted saying,"The Birds have landed safely in Ambala". In a series of tweets, Singh said "the touch down of Rafale combat aircrafts in India marks the beginning of a new era in our Military History. These multirole aircrafts will revolutionise the capabilities of the IAF". Rafale Fighter Jets Land in India: 1st Batch of Five 'Omnirole' Aircraft Arrives at Ambala Airbase in Haryana.

Home Minister Amit Shah termed the landing of Rafale jets in Ambala as a "historic" event. Shah took to Twitter and said, "These (Rafale) are the world's most powerful machines capable to thwart any challenge in the sky. I am sure Rafale will help our Air warriors to safeguard our skies with its mighty superiority."

The Rafales were escorted by two Sukhoi 30 MKIs after they entered the Indian air space. The Rafale jets are considered one of the most potent combat jets globally, landed at the Ambala Air Force base after covering a distance of 7,000 km from the Merignac airbase in French port city of Bordeaux.

(The above story first appeared on LatestLY on Jul 29, 2020 04:33 PM IST. For more news and updates on politics, world, sports, entertainment and lifestyle, log on to our website latestly.com).