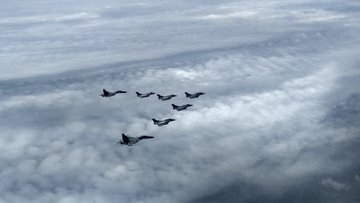 In the video, Su-30 MKIs are at both ends of the formation. Indian Air Force (IAF) chief Air Chief Marshal Rakesh Singh Bhadauria will receive the advance aircraft at the Ambala Airbase. The aircraft took off from Merignac in France on Monday. They had a one-day stopover at the Al Dhafra airbase near Abu Dhabi. IAF Chief Air Chief Marshal Rakesh Bhadauria will likely the jets at the Ambala Airbase. Amul Dedicates Doodle to Rafale Aircraft; Dairy Brand Releases Topical Ad 'Jab We Jet' Ahead of Arrival of Fighter Jets.

The five Rafales escorted by 02 SU30 MKIs as they enter the Indian air space.@IAF_MCC pic.twitter.com/djpt16OqVd

Section 144 was imposed in areas adjoining villages of  Ambala Airbase. The first Rafale jet has a tail number RB-001, which denotes the initials of the Air Chief Marshal Bhadauria. The newly inducted Rafale will be part of IAF’s No. 17 Squadron, also known as “Golden Arrows”.

(The above story first appeared on LatestLY on Jul 29, 2020 02:33 PM IST. For more news and updates on politics, world, sports, entertainment and lifestyle, log on to our website latestly.com).