Rains Wreak Havoc in Maharashtra, Normal Life Thrown Out of Gear in Gujarat and Madhya Pradesh Due to Floods

Prime Minister Narendra Modi has assured Gujarat CM with all necessary help including NDRF in order to mitigate the sufferings of the people affected by the flood in the state. 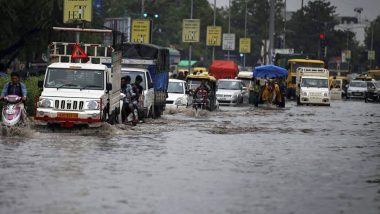 People travel through the flooded street of Gujarat. Credits: PTI

Mumbai, July 13: The India Meteorological Department (IMD) on Wednesday said that due to a low pressure area lying over the south coastal Odisha, isolated very heavy rainfall is very likely over West Madhya Pradesh from July 13-17; East Madhya Pradesh from July 14-16; Vidarbha and Chhattisgarh on July 13; Coastal & South Interior Karnataka on July 13; Konkan & Goa and Madhya Maharashtra on July 15 and 16; Gujarat region on July 14; Odisha from July 14-16 and over Saurashtra & Kutch on July 15, 2022.

As heavy rains continue to lash several states across the country, Maharashtra, Gujarat and Madhya Pradesh seem to be badly affected by the heavy downpour.

Maharashtra | Death toll due to rain and flood situation in the various districts of the state rises to 89 with 5 deaths in the last 24 hours. pic.twitter.com/eqVoDMMWRb

In view of the torrential rains in the state, the IMD has issued a red alert Kolhapur, Palghar, Nashik, Pune, and Ratnagiri districts till July 14. Besides, an orange alert is also in place for Mumbai. It has also forecasted intense spells of rain at isolated places in Mumbai, Palghar, Thane, Raigad, and the Ghat areas of Pune, Satara, Nanded, Hingoli, Parbhani, and Latur among others.

Several areas from Mumbai including Andheri, Bandra, Sion, Dadar reported waterlogging after heavy rains lashed the city. On Monday, various temples were submerged under the Godavari river in Nashik as the city remained inundated due to incessant rainfall. According to a report released by the Maharashtra State Disaster Management Department on Sunday, a total of 76 people died (till July 10) from July 1 and as many as 839 houses were damaged due to the rain-related incidents across the state.

Both side vehicular movement at Gandhi Market is now smooth. pic.twitter.com/yNC7CbW5Z2

"At least 4,916 people have been shifted to safer locations, and 35 relief camps were set up by the disaster management department and rehabilitation department," it said. The report also mentioned that around 125 animals lost their lives due to rain incidents. According to reports, several rivers crossed the state have reached the warning level. While the Kundalika river has crossed the warning level, the water level in Amba, Savitri, Patalganga, Ulhas and Garhi rivers are said to be below the warning level.

Maharashtra's neighbouring state Gujarat has also been badly battered by heavy rainfall which has led to flooding in several areas across the state. On Tuesday, Gujarat Chief Minister Bhupendra Patel conducted an aerial survey of the flood-affected areas in Chhotaudepur, Narmada and Navsari districts. Patel also visited the Bodeli town, which has seen maximum damage due to incessant rainfall. Meanwhile, heavy rainfall led to waterlogging in several areas of Gujarat including Ahmedabad and Navsari.

Meanwhile, the Nyari dam in Rajkot district overflowed on Wednesday as heavy downpour continued to lash several parts of the state. Reports also suggested that the roads and bylanes in Navsari district were submerged under rainwater as the flood situation in Gujarat remained grim.

Gujarat | Severe water-logging in several parts of Ahmedabad due to continuous heavy rainfall in the region (12.07) pic.twitter.com/KF4pFQRRty

According to a report in ANI, Prime Minister Narendra Modi has assured Gujarat CM with all necessary help including NDRF in order to mitigate the sufferings of the people affected by the flood in the state. The Meteorological Department has forecasted light to moderate rainfall in the entire state for the next four days. The weather agency has also predicted heavy rainfall in districts of South Gujarat, Saurashtra and Kutch.

Several villages in Gujarat have been cut off, thereby prompting officials to deploy helicopters in order to rescue people. Reports also suggest that several people have lost their lives due to floods in the state. So far, over 2000 people have been evacuated from various areas. NDRF teams have been deployed to rescue people. The Meteorological department said that Gujarat's grim situation is due to flash floods with people struggling to procure even essential items.

After Maharashtra and Gujarat, Madhya Pradesh continues to be the worst-affected states in the country. Officials said that at least 47 people have been killed due to lightning strikes in a span of just a week, while 111 others lost their lives in the last one-and-a-half month. Scientists from the Regional Meteorological Centre said that Bhopal alone has reported around 7,000 lightning strikes in the state.

Heavy rainfall since the last few days has thrown normal life out of gear in several parts of Madhya Pradesh, including areas such as Bhopal, Harda and Chhindwara district among others. On Monday night, Bhopal recorded 92 mm of rainfall which was 133 per cent more than the same period last year.

According to a report in news agency IANS, at least 200 people, including children and women were rescued from the flood-hit Harda district and shifted to safer places. The heavy rains has led to flooding in the district with more than 70 houses being submerged underwater.

The chief minister's office said that several teams have been deployed to rescue people caught in floods and take them to safe places. Meanwhile, the Highway connecting Bhopal-Betul was closed for vehicular movement due to the overflowing of Mancha river.

(The above story first appeared on LatestLY on Jul 13, 2022 01:36 PM IST. For more news and updates on politics, world, sports, entertainment and lifestyle, log on to our website latestly.com).