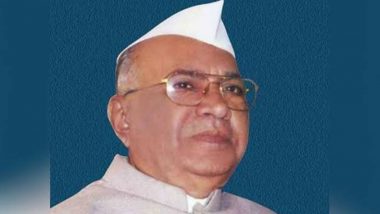 Mumbai, August 5: Senior Congress leader and former Maharashtra CM Shivajirao Patil Nilangekar died in Pune on Wednesday morning. Last month, he had tested positive for coronavirus. Patil was already undergoing treatment at a hospital in his home territory of Latur when he tested positive for the COVID-19 and was then moved to a private hospital in Pune. After his swab test confirmed that was coronavirus positive, he was moved to Pune for further treatment.

Patil Nilangekar led Maharashtra as the CM for a brief period in 1985-86. According to reports, he had to resign when the Bombay High Court passed strictures against him after his daughter's marks in the MD exams were found to have been fudged. Amar Singh, Rajya Sabha MP and Former Samajwadi Party Leader, Dies at 64.

His grandson Sambhaji Patil is a BJP MLA and was the labour minister in the Devendra Fadnavis-led government. His daughter-in-law, Rupatai Patil Nilangekar, represented Latur (Lok Sabha constituency) for BJP from 2004 to 2009.

(The above story first appeared on LatestLY on Aug 05, 2020 08:22 AM IST. For more news and updates on politics, world, sports, entertainment and lifestyle, log on to our website latestly.com).