Sologamy Wedding in Gujarat: Kshama Bindu, Vadodara Woman Set To Marry Herself; Says 'I Love Myself and Hence This Wedding'

""Self-marriage is a commitment to be there for yourself and unconditional love for oneself. It's also an act of self-acceptance. People marry someone they love. I love myself and hence this wedding," Kshama said. 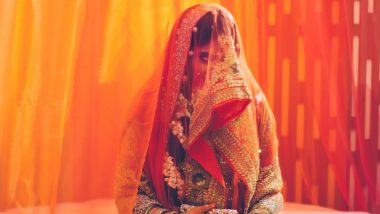 Vadodara, Gujarat, June 2: In what would be termed a unique wedding, 24-year-old Kshama Bindu from Gujarat is all set to tie the knot and have her happily ever after. However, Bindu's wedding comes with a twist. The youngster is getting married to herself on June 11. Bindu's wedding is nothing less than a solo affair from the word go.

According to a report in the Times of India, the wedding, which is said to be the first of its kind will have it all - from "feras" to traditional rituals and even wearing the vermilion. Interestingly, there will be no groom and it won't be like any other big fat Indian wedding. Bindu's wedding is probably the first self-marriage, or sologamy in Gujarat and likely in India too. Sidhu Moose Wala Murder: Late Singer's Friend Reveals Chilling Details; Locals Say Moose Wala Was Alive for Few Minutes After Attack.

"I never wanted to get married. But I did want to become a bride. So I decided to marry myself," Bindu said. In order to marry herself, Kshama did some research to know if any woman in the country has married herself, however, she couldn't find any. "Maybe I am the first to set an example of self-love in our country." she said.

Kshama, who works in a private firm further added, "Self-marriage is a commitment to be there for yourself and unconditional love for oneself. It's also an act of self-acceptance. People marry someone they love. I love myself and hence this wedding." She also stated that some people might perceive self-marriage as irrelevant.

"But what I am actually trying to portray is that women matter," Kshama said. She also added that her parents are open-minded and have given their blessings to her wedding. Another highlight of the wedding is the fact that Kshama has written five vows for her wedding, which will be solemnised at a temple in Gotri.

What's more? The bride has also planned a two-week honeymoon in Goa on her list of post-wedding plans.

(The above story first appeared on LatestLY on Jun 02, 2022 11:09 AM IST. For more news and updates on politics, world, sports, entertainment and lifestyle, log on to our website latestly.com).